Throughout his life, Muhammad Ali was The Greatest. In the ring, he was indomitable. When drafted into the Army, he said his religious convictions made him a conscientious objector. He stood by his principles and refused induction even though it resulted in his conviction for draft evasion and the loss of his boxing titles during the peak of his career. Eventually, the Supreme Court overturned his conviction.

Earlier this year, the full scope of Ali’s international impact was evident when he died. Dignitaries from around the world flocked to Louisville to honor the Champ and those who couldn’t come watch the news coverage.

Ali’s legacy continue through the Muhammad Ali Center programs that promote peace and understanding and honor those who exemplify the Champ’s core principles. In the continuation of a four-year tradition, the Muhammad Ali Humanitarian Awards were presented in a gala ceremony on Saturday, September 17. The award winners and presenters were luminaries from around the world. Stars of stage and screen, musicians and leaders and founders of organizations that exist only to help those in need.

Two members of the Jewish community were among this year’s award recipients. 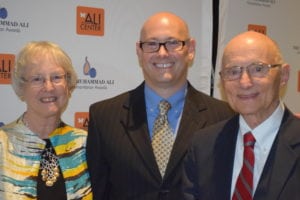 John Rosenberg received the 2016 Muhammad Ali Kentucky Humanitarian Award. He is best known as the founding director of the Appalachian Research and Defense Fund of Kentucky (known as AppalReD), which has long been a refuge and advocate for the poor and disadvantaged in the Appalachian counties of the state, but his life and career go well beyond that.

In an interview prior to the presentation, Rosenberg described himself as a lawyer who does nonprofit work and is “sort of retired from the general practice of law.”

“It’s a great honor for the organization that I headed for about 30 years,” he observed, adding, “and it’s nice to see lawyers who represent people who are poor to be recognized with an award like this. I’m here, I’d like to say, in a representative capacity for them and some of the other community work that I’ve be involved in with lots of other people. You never do these things alone.

“It’s a great honor for me,” he said, “and I appreciate it very much.”

“Judaism is very important to me,” he continued. “Isaiah says, ‘Justice you shall seek,’ and so I hope the folks I work with and the kind of work we do will always be following in that direction.”

When he accepted the award, Rosenberg explained that he is a Holocaust survivor. He was just 7 when he was forced to watch the Nazis blow up his synagogue, make a bonfire of their Torahs and prayer books and arrest his father. His father was released after 11 days and the family spent a year in a detention camp in Holland before being allowed to come to this country.

Rosenberg expressed pride in this country for allowing a refugee like him and a person like Muhammad Ali to rise. 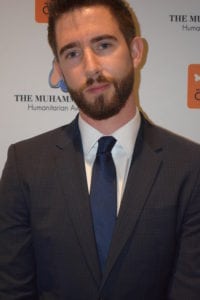 “This award is an incredible honor,” Glick said in a pre-event interview. “It’s an incredible privilege to be in any way connected to the force of nature that was Muhammad Ali and what he did for social values. Many of his core values are very similar to Jewish values.”

IsraAID is a leading disaster response organization that has been on the scene in the Philippines after Typhoon Haiyan, Sierra Leone after the Ebola outbreak, Northern Iraq since the emergence of the Islamic State, and in many other places. Glick sees the award as a way put forward what the victims of disasters day in and day out as their struggle to recover stretches into months and even years.

IsraAID enables the tiny state of Israel to practice tikkun olam in a big way. “It’s a basic Jewish notion,” he said, “giving and supporting, and it’s an incredible way for us as Jews, as Israelis, to come together and view our identity as a way of connecting to the larger world during the times of need.

“And I can say that with everything that we hear and of all the problems and anti-Semitism,” he added, “everywhere I’ve been, people have been just wonderful. People are so kind and so accepting and just so grateful for our help – not just because we’re like everyone else, but because we’re a small country, we’re a small minority and because of what we do.

“It’s really special for them and I think if more Jews and Israelis understood this, they would understand how important this work is and would want to get involved,” he concluded. “It’s truly also a blessing to be part of this.”

When he accepted the award, which was presented by Dwight Howard, Glick added, “May we all find the spark of Muhammad Ali’s strength in our hearts.”

A highlight of the evening was when Lonnie Ali introduced the 75 for 75 program. Noting how difficult this year’s program was since it is the first year that Muhammad Ali was not there in person, she said the Champ would have celebrated his 75th birthday in January. Months before his death, she and others close to Ali began to try to figure out what to do for this milestone.

“Muhammad had many things and didn’t need anything,” she said. Then they hit on a different idea. “I believe he would like it if we would ask people to donate 75 hours of service to others in his honor.” So now, in his absence, Lonnie Ali called on everyone to donate 75 hour of service over the next year to honor Muhammad Ali’s legacy.

Earlier this month, a rumor was started in Israel that three Syrian Jewish refugee families were sponsored by a Conservative synagogue and a refugee resettlement agency here in Louisville and that the families are already living here. The story is …

Jewish Family & Career Services is known for its great volunteer program. More than 300 men, women and children help to lighten the load, enhance capacity for service, advocate for JFCS programming, donate to help the less fortunate and give …