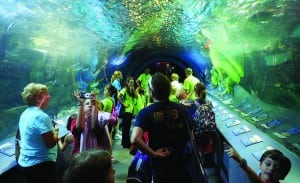 As she showed campers pictures of the Israeli flag and the symbols of the Israeli Defense Force and the the city of Jerusalem, Noga Peled inspired a sense of wonder and learning in children who may not know about the spirit of Israel, her home country. Peled, 20, is the Jewish Community Center Summer Camp shlicha, and she will work with campers all summer to bring Israel to Louisville children.

Peled, who grew up in Haifa, already has a background in teaching children. During her time in the IDF, she was in the Homefront command.

“I had a job to teach kids how to act in critical situations when there is a siren for the missiles and when there is an earthquake, what should they do,” she said. “So, I moved between schools and taught kids.”

Steklof said that so far, Peled has been a great fit for camp. 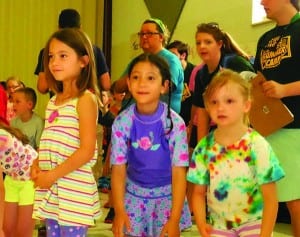 “The kids are loving her, and the staff are loving her,” he said. “She teaches the kids and staff fun games from Israel, including a Jump Over the Snake game, played with a jump rope, and a game called Color Tag, in which a color is named and the runners are safe if they are touching that color.” Peled is excited to immerse herself in Louisville’s culture while she’s here.

“I’m interested in meeting Jews outside of Israel to see how they find a connection to Judaism in Israel,” she said. “It has always interested me. Other than that, to have fun – it’s a once-in-a-lifetime experience. … It’s always nice to have friends all around the world.”

Steklof said the objective of the shlicha program is to bring Israel into Louisville’s camp.

“The goal is the educate campers and their families about Israel, so that they get a different view about it than what they hear on the news,” he said. “So that they see that we are all humans and we are all the same.”
As a specialist in Israeli culture, Peled will teach all about her home country. The instruction is “less about Judaism because not all the kids are Jewish, but mostly about Israel, Israeli spirit and about Hebrew,” she said. 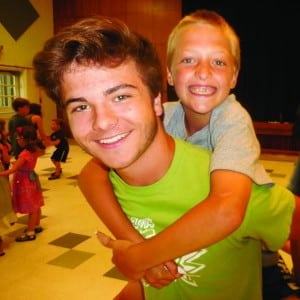 During her first week teaching the children, she taught them the meaning of shalom, which most of them already knew. Then she taught them the Hebrew word for the color white, lavan. She incorporated lavan into their game of Color Tag, and another game, similar to Duck, Duck Goose.

Peled is staying with several host families throughout the summer, and her first hosts, Dafna Schurr and Eddie Cohen, took her to the Newport Aquarium. “It was amazing!” she said. “There’s nothing like it in Israel. Amazing. Also I saw a bit of nature in Indiana (while driving to visit her host family’s friends). It’s amazing to see all the views!”

The biggest thing that has surprised her so far? “The tomatoes are huge! At home they are much smaller and have a stronger taste.” She also hopes to see more of the area and to take in a horse race.

Peled said “it’s a thing” in Israel that after young people have served their time in the IDF, they travel the world. “After being here for the summer, I’m planning to go to the Far East and see Thailand, Japan, Vietnam,” she said. After her travels, she plans to study in Israel. She has not settled on a major, but will probably study law and international relations.

“Noga seems to really be enjoying her first time in Louisville,” Steklof said. “It’s always nice having someone on staff who is not American and can bring a different perspective to the children.”

Her host families for the summer are: Dafna Schurr and Ed Cohen, Gila Glattstein, Faina and Ariel Kronenberg and Family, Keren and Yariv Benabou and family, Judith Danovich and Nick Noles and family and and Sally and Jeff Davis and family.

The Zimmerman Family Summer Fun Fund was established in 2014 in memory of Eddie Zimmerman, a beloved member of our community who spent many summers as a camp counselor at the JCC. Twenty campers have been helped this season thanks …