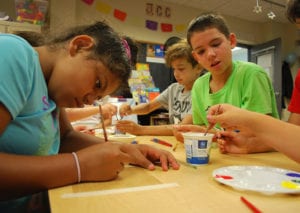 Camp J Director Mindye Mannel gushed about the 2019 summer season, citing her staff and venue as strengths and the challenges they overcame. She also looks forward to fall “enrichment” classes and even next year.
“We had probably more returning staff this year than we’ve ever had, and that brings a better-trained staff – that better knowledge base,” Mannel told Community, citing one reason for this year’s success. “I think that’s been a huge asset to camp.”
The camp’s indoor activities, as well as drop-off and pick-up were next door at the former Anshei Sfard synagogue, easing traffic and noise at The J’s main building where, until this year, many campers met in the upstairs classrooms for activities.
Campers had to walk a longer route between the two buildings to avoid parking lot traffic, but the route enhanced the kids’ safety, Mannel said.
The camp maintained its vigilance in the new building, locking doors and placing kids directly into their cars when they arrived and left.
While pick-up and drop-off were a challenge at first, camp staff worked out the kinks after the first two weeks. At first, cars were lining up on Dutchman’s Lane, causing some traffic snarls. By the end of camp, though, two lines of cars were created, easing the headaches, Mannel said.
Once again, two Israeli shlichim were in camp this summer. Guni Saar and Zohar Zippori were more integrated into the camp structure, Mannel said. Saar focused on teaching music, while Zippori mostly worked in theater camps.

It was the first time in several years that one of the shlichim – Saar – was a man.
“It was a good experience to have a male shlichim at camp this year,” Mannel said. “Any male role models are great … but Guni was exceptional in his role as a music instructor and a counselor overall. It has been several years since we have had a male at camp.”
Instead of the shilichim teaching Israeli culture all day, Israeli culture was woven throughout all aspects of camp. “Art infuses Israeli culture, science and nature, and all of our programs infuse it,” Mannel said. “It makes more sense, rather than just having one activity that does it.”
She added that Zippori loved being here so much that she wants to come back next year. Mannel hopes to make that happen.
The most in-demand camps this year were Cooking and Snapology, but Chess proved to be a surprise hit.
Taught by Corbin Seavers of the West Louisville Chess Club, the popular camp will spill over into fall with a newly formed chess class in The J’s Youth Enrichment program (see text box below), which Seavers also will teach. Dance is another camp that is continuing this fall with Ballet & More. McKenzie Ricklefs of Bellarmine University’s Dance Team will teach it. Snapology and Sports & Games classes will also be available.
Many specialty camps sold out this year, even a few of the regular day camps for the first time, including Young Leaders (seventh through ninth graders) and some weeks of Trek (fourth through sixth graders).
While next year’s camp theme has not been determined, Mannel hopes to expand on the successes of 2019, offering more specialty camps and continuing to visit unique places on field trips. “We’ll be more creative with the camps that we have and potentially do some more,” she said. “I think we can do more outdoor programming and get more creative with that potentially, based on available space.”