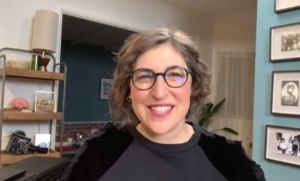 A child star who grew up to be a neuroscientist, Jewish actress Mayim Bialik just can’t shake the acting bug.
In fact, the 45-year-old actress, who made it big in the CBS sitcom Big Bang Theory, is in front of the camera again; this time, in the new Fox comedy, Call Me Kat, which is set in Louisville.
But while acting is the profession she loves, Judaism, particularly the teaching of tikkun olam, is what defines her life.
“The love for finding compassion and beauty in every person,” Bialik said in a pre-recorded message to KI, “those to me are Jewish values, the notion of, you know, building a life around helping others.”
Bialik spoke to Keneseth Israel Sunday, April 18, for its virtual fundraiser, “Brunch with Mayim: Finding Positivity in a Changing World.” The fundraiser attracted some 175 people.
Bialik’s interesting career journey took root in the ’80s on the set of the NBC TV series Blossom. There, between shoots, the 11-year-old actress studied with a tutor, who ignited her love for science.
She went on to earn a Ph.D. in neuroscience from UCLA, where she researched a genetic disorder caused by a loss of function of specific genes in newborns. The title of her thesis? Hypothalamic Regulation in Relation to Maladaptive, Obsessive-compulsive, Affiliative, and Satiety Behaviors in Prader-Willi Syndrome.
As soon as she finished the program, though, Bialik, who said she needed health insurance, returned to acting.
That eventually led to her role in The Big Bang Theory, where she played – what else? – Dr. Amy Farah-Fowler, a scientist.
Her current gig, Call me Kat, which is based on a British show, is about a 30-something single woman – a former University of Louisville professor – who spends the money her parents set aside for her wedding to open a cat café in the Derby City.
Bialik, who spoke at a Louisville Jewish Federation event in 2011, said the show highlights the Southern charm and “laid-backness” of the city without teasing it.
Turning to her Jewish upbringing – she was raised Reform and is now Modern Orthodox – Bialik, a distant relative of the poet Chaim Nachman Bialik, said her grandparents were Eastern European immigrants, while her parents were “Bohemian” types – artists and documentary filmmakers.
While her mother distanced herself from Judaism, Bialik embraced it. She loved Hebrew school and studied Judaism in college, including Hebrew and Yiddish. She keeps a kosher household and follows the traditional Jewish calendar.
That’s especially true for Shabbat, she said.
“Just the notion that there’s a day on which I don’t serve anyone, I’m not required to do my work,” she said, “that’s a real blessing that I get every week, that we all get every week.”
She likes the community rituals of Judaism, singling out some KI customs, such as kiddush after services, and noting the part they play in bringing Jews together.
“Those things stayed with me, and I know y’all do that as well, as do many synagogues, because those are often the kinds of things that keep the community feeling together.”