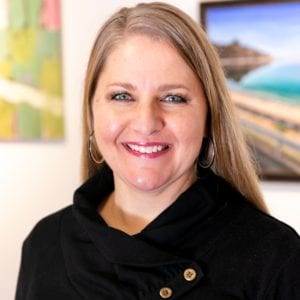 For Tara Stone, the word “senior” does not necessarily equal “retired.”
That’s why the new senior activities director at The J is focusing her effort on people ages 55 and up, “bringing more programming to those who are getting ready to retire.”
Stone, who succeeds Diane Sadle as senior director, started her new job on Jan. 1.
Her focus will build on Sadle’s work, which reached out to baby boomers with more travel and out-of-building activities. Stone also wants to emphasize physical, mental and spiritual activities, acknowledging that seniors are more active than are sometimes perceived.
“When people think of our senior adult program, they think it’s all for the elderly, and not necessarily for those who are spry, active and able to do,” Stone said.
She said she wants to change that.
She hopes to promote existing activities at The J, such as pickleball. But she also has new activities in mind, which she is not yet ready to name.
But she did say plans to offer what she calls “bucket list” activities to her members.
“Maybe there’s an instrument they want to learn to play or a language they want to learn, some place to go,” Stone said. “To me, there’s so much opportunity.”
She also plans to commit more of the center’s resources to cognitive programming.
“That’s something I am passionate about,” said Stone, whose grandmother had Alzheimer’s. “I’ve spent a lot of time with Alzheimer’s and dementia [clients].”
In fact, At Sunrise Senior Living, where she previously worked as activities and volunteer coordinator, 75 percent of the residents had some kind of “cognitive impairment.”
By offering more fitness activities for the mind, she said, she hopes to prevent, or at least delay, impairment in clients who don’t yet exhibit the symptoms.
(Being “intellectually engaged” may stimulate the brain, according to the National Institute on Aging. Citing studies, it said activities such as volunteering or taking up hobbies improve thinking ability while improving one’s outlook and teaching new skills.)
This is not Stone’s first stint at The J.
A native of Elma, Michigan, she moved to Louisville in 2010 and started work at the then-Jewish Community Center in 2011 – as a 90-day temp.
By the time she left – in 2017 – she held the position of wellness and member experience director, overseeing seniors, fitness and customer service.
After she left, she ran a boutique and DIY jewelry- making business and taught an afterschool art class at the Americana Community Center, which serves Louisville’s refugee, immigrant and underserved populations through education and family support.
She worked Sunrise Senior Living prior to returning to The J.
Mindful that the Senior Center serves Jews and non-Jews, Stone nevertheless promised to maintain the Senior Center’s Jewish holiday activities, noting that the majority of her clients are Jewish.
“We will definitely keep our traditional holiday celebrations and Friday Shabbat,” Stone said.