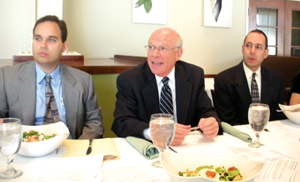 On the first day of school this year, the Jefferson County Public Schools found themselves with a major problem.

The system had planned carefully for the first day of a new busing program that was designed to bring the district into compliance with a 2007 Supreme Court ruling that race could not be the sole factor used in making classroom assignments, yet maintained the diversity that the district values.

A detailed tag system had been designed to ensure even the youngest students would board the correct bus and no student would ride the bus for more than 75 minutes, with only 400 of the 20,000 bus riders traveling more than an hour each way. In fact, 56 percent of students are bused less than 30 minutes.

When the first day came, however, the system failed. Despite specific instructions, two principals had failed to implement the tagging system. That led to delays in getting 200 students home, and a few children didn’t make it home until 9 p.m. – more than six hours after school let out.

The problem was corrected the next day and the two principals were suspended for brief periods, but the damage had been done. What should have been a smooth transition to the new, carefully balanced student assignment plan instead led to an uproar focusing on a small group of students who did not get to attend their school of choice.

The loudest group demanded the right to enroll their children in the school closest to their homes, and Kentucky State Senate President David Williams (R-Burkesville) teamed up with Sen. Dan Seum (R-Louisville) to introduce legislation that would require school districts across the state to allow students to attend the school closest to their home if that is what their parents want.

JCPS Superintendent Sheldon Berman believes this measure would lead the district down the road to disaster forcing the resegregation of schools throughout the district and across the state, and he is speaking out publicly, as often as he can, to make his case.

Berman started by reminding JCRC members that JCPS and the Jewish community have worked together before. In 2008, when Berman wanted to introduce the civics curriculum “Facing History and Ourselves” into high schools across the district, the superintendent turned to the Jewish community for help funding the training program for teachers that enabled them to implement the program, based on lessons learned from the Holocaust, effectively.

Today the program, which stresses the value of diversity, understanding and accepting differences, and tolerance, is being used effectively in all but one high school in the district, and the sole exception offers a Holocaust curriculum to its students.

Berman still believes this is the most powerful civics curriculum available and he is pushing for other districts in the state to adopt it.

Now, faced with the filing of the Williams-Seum bill in the Senate and a small but loud and vocal group of parents demanding the right to send their children to their home schools, Berman included the Jewish community as he fights to preserve the student assignment plan implemented this year.

He described the plan as a fine balance, with a little over 50 percent of the school population attending their neighborhood schools. For kindergarteners and first graders, that percentage rises to 58 percent.

The plan, Berman said, was designed to create more choice for parents, creating six geographically defined clusters that include a mix of schools from neighborhoods of different socio-economic standing, designated as “A” and “B” areas, from which parents can choose. The plan also created 22 new magnet schools including options in elementary school for Montessori programs, an international baccalaureate curriculum and more.

Parents were asked to select two schools in their cluster from “A” areas and two from “B” areas, ranking their choices. The district’s goal was to maintain geographic diversity so no school would have less than 15 percent nor more than 50 percent of its population from “A” areas – those that are in poorer neighborhoods.

With this plan, Berman said 93 percent of families with kindergarteners and first graders got their first or second choice for school assignments. Many families choose magnet schools despite the fact that their children must ride on buses for 45 minutes or longer each way.

The results, he said, are remarkable. For 35 years, Jefferson County has had the best integrated school system in the country. Only 4.7 percent of its schools have student bodies that are 80 percent or greater either white or minority. In the second most integrated school system, Wake County Schools in Raleigh, NC, 10.5 percent of schools exceed the 80 percent segregation mark. Among urban school districts, most communities have 75 percent or more of their schools above 80 percent segregated.

If the Williams-Seum bill were to pass, Berman believes a third of the current student population would be forced to attend different schools.

Among the results Berman believes the community would see if the Williams-Seum bill were implemented would be a significant resegregation of Louisville’s schools, increased time students spend on buses and increased transportation expenses for the district.

One of the arguments Sens. Williams and Seum are making is that parents whose children attend distant schools have difficulty getting to the school for conferences and other activities that involve them. The schools are already addressing these issues, Berman said. Instead of a neighborhood school, they create neighborhoods within the schools. To accommodate parents who do not live near the buildings, schools sometimes plan events in other locales and at other times, they bring the parents to the schools.

After his formal presentation, Berman answered questions from JCRC members for nearly an hour, handling criticism and complaints as well as praise and compliments. He even offered to meet privately with one unhappy parent.

The superintendent provided a wealth of supplementary material and encouraged JCRC members to carry the conversation out into the community.