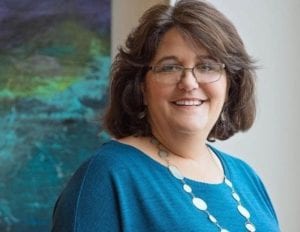 Dr. Karen Berg will be the only Jewish member of the Kentucky General Assembly when it reconvenes. (photo provided)

Dr. Karen Berg won her special election for the state Senate from District 26, guaranteeing that a Jewish lawmaker will be part of the next session of the Kentucky General Assembly.
With all 82 precincts reporting, in a district that spans Jefferson and Oldham counties, Berg, a Louisville Democrat, held a sizable lead over her Republican opponent, Bill Ferko, with nearly 58 percent of the vote.
The results are still unofficial, but Berg expects them to be certified next week. If they hold up, she will become not just the only Jewish member of the legislature, but its first female physician.
In another contest involving a Jewish candidate, Daniel Grossberg lost his primary bid to unseat longtime incumbent Democrat Tom Burch in House District 30.
Community does not make political endorsements.
“I’m very excited; I’m humbled; I’m ready to get to work,” said Berg, who will serve out the unexpired term of Ernie Harris, who resigned earlier this year. “There’s a lot of good work to get done.”
A diagnostic radiologist at the UofL Health, Berg has credited her Jewishness as the motivation for the professional and political work she does.
“My faith drives me to be compassionate, respectful and help people in every way I can,” she said.
Even though the General Assembly is not expected to convene again this year, unless a special session is called, Berg said she will receive her committee assignments and get to work preparing for next year’s regular session.
“The senators and representatives all work out of session,” she said. “You need to spend the year getting ready for the work you do in the session.”
As a physician, Berg supports Gov. Andy Beshear’s plan to reestablish Kentucky’s health insurance exchange, which was dismantled by his predecessor, Matt Bevin. But she said her top priority in the Senate, at least initially, will be to “listen and learn.”
There are currently no Jewish members of the General Assembly. The last one, Kathy Stein of Lexington, left the Senate in 2013 to become a Fayette County Family Court Judge.
Grossberg, a Louisville realtor, was making his first run for the legislature, but it won’t be his last.
“I’m running again in 2022 – same seat,” he said.
He credited Berg for showing that candidates from minority communities – in this case, the Jewish community – can still win election to state offices in Kentucky despite in a polarized political climate.
“She didn’t win because Jews voted for her,” Grossberg said. “She won because non-Jews were willing to listen to her message, and they thought she would be the better senator. Karen had a vision, and people bought it.”