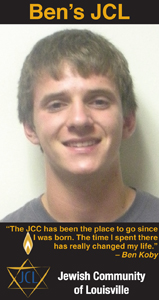 Ben Koby, a sophomore and straight A student at Manual High School, is the seventh generation of his family to live in Louisville and have a personal connection to the Jewish Community Center. In fact, he is excited to be working at his first salaried job this summer as a counselor at the JCC camp. Since he spent many years attending the camp himself, he is having a wonderful time helping his young charges enjoy the experience as well.

“I have so many friends that I’ve met through BBYO (B’nai B’rith Youth Organization) both locally and across our Kentucky, Indiana and Ohio region,” says Koby. “I have served as secretary and vice president of recruitment for my chapter and hope some day to be president of my chapter and the region as well.” He just returned from a CLTC (Chapter Leadership Training Conference) at Beber Camp in Wisconsin and had a great time.

Recruited to BBYO as an eighth grader, he finds it meaningful to help other newcomers to his chapter get the most they can from the experience. He is always pleased when eighth graders he persuaded to attend a regional conference come back and thank him for encouraging them to attend. That’s probably good training for someone who would like to be an attorney some day.

Koby has taken part in football, wrestling and track at school and has spent time volunteering in the Jewish community during the Day of Service for teens at the JCC and with Super Sunday and Pledge 13. He reports that his friends at school are envious of the many opportunities he has had to meet new people and travel to other cities. Several even asked if he could get them in to some of the BBYO events!

Koby is the son of Risa and Charles Koby and the brother of Alex, a seventh grader and future BBYOer whose bar mitzvah will be over Labor Day weekend.