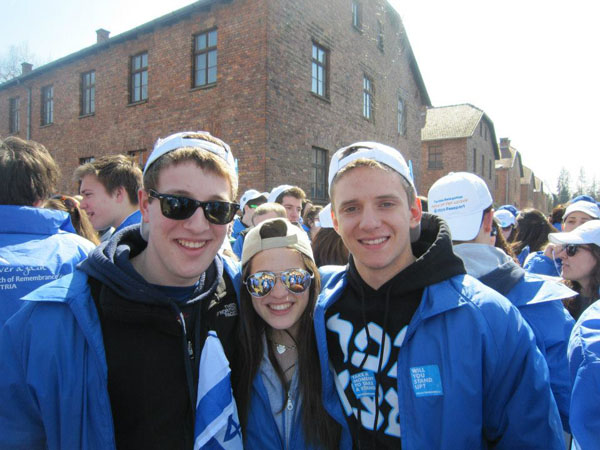 As the years pass and the generation that lived through the Holocaust dwindles, the Jewish community is faced with the challenge of keeping the memories alive in a meaningful way so its lessons of diversity and tolerance remain vibrant and relevant to the next generation and “never again” does not become an empty phrase.

One of the most effective, intense and visible Holocaust education programs is the March of the Living, which brings teens from around the world to the death camps and other sites in Poland, including a stop at Auschwitz/Birkenau on Yom HaShoah, Holocaust Remembrance Day, and then on to Israel where they join in the Yom HaAtzmaut, Israel Independence Day, celebrations.

This year, Louisvillian Ben Koby was one of the participants in the March of the Living.

“The camps themselves were rather overwhelming,” Koby said, “to the point where I almost lost my sense of feeling. They caused me to become numb just from overstimulation.”

Of the three camps he visited – Treblinka, Auschwitz/Birkenau and Majdanek – Koby said the most powerful was Treblinka. Treblinka “had been destroyed by the S.S. at the end of the war,” he said, and “instead of a camp, there now stands a monument to those who perished in the Holocaust.”

That monument is a sea of 17,000 gravestones – each bearing the name of an entire Jewish community destroyed by the Nazis. “This site was the most powerful for me simply because it was less in your face,” he continued, “and allowed for more contemplation … of the cruelty and horror that happened there.

“The field was massive,” he added, “so big that at points you could barely see the end of it. And each one of those stones, packed relatively closely together, represented some town or village whose inhabitants’ lives, and by extension, the town itself’s live, had been obliterated.”

For the March of the Living itself, participants walked from the gates of Auschwitz to Birkenau, reaffirming life on a march that during the Holocaust meant certain death.

“We saw people from all corners of the world who had come to show support and participate on this march – approximately 12,000 total,” Koby said. “There were people from Mexico, Panama, Brazil, South Africa, France, England, even some from Taiwan. It was definitely a wonderful experience just to see all these people from all walks of life and to meet them.”

In Poland, the group also visited the remains of the Warsaw Ghetto. “There were monuments to the leaders and to the fighters who had so bravely stood up in the face of death, delivering the everlasting message that they were indeed human,” Koby stated.

“For me, there was one monument that really stood out,” he continued. “It was a two faced flat plaque made out of bronze. On one side there were images of those who had suffered, those who were defeated and those who had not stood up. On the opposite side, there was an impression of heroism – those in the ghetto who had stood fast and resisted their impending doom with all the strength of their bodies.

“I’ve always been a person who is affected very strongly by stories of heroism and martyrdom,” he said. “Needless to say, the Warsaw Ghetto uprising was very powerful story for me.”

Leaving Poland and its many reminders of the Holocaust, the March of the Living participants traveled to Israel to the modern, living Jewish State.

“When we first landed, it almost came as a shock that all the signs were in Hebrew,” Koby said. “We immediately began our tour traveling to Masada and the Dead Sea.

“One of the most impressive aspects of Israel for me was the landscape,” he said. “The beautiful rolling hills, the desert, and even the architecture all stood out.”

The group joined the Israelis in celebrating Yom HaAtzmaut. “It was a crazy experience,” he said. “There were people running around spraying everyone with shaving cream and silly string. It was an all-around festive atmosphere and I’m glad I got to enjoy it.” As an added bonus, Yom HaAtzmaut was also Koby’s birthday.

The group did a lot of touring in Jerusalem over several days. “One of the neatest things we did,” he said, “was touring the tunnels under the Kotel which delved deep into the original part of the temple.

“We learned that Jerusalem is a city that has constantly been built on top of itself. Only 10 feet underground lies an entire city constructed during the Roman occupation, and under that lie even older parts from history.” Koby, who describes himself as “a history guy,” was fascinated to find “how everything was there from all time periods.”

Koby and his friends experienced a different kind of lifestyle when they spent a few days in a kibbutz near Beit Shean. He found it interesting to see how “they lived in a community that was very supportive and very collective as opposed to the normal American society, which is more everyone for themselves.”

The participants also split up into small groups and enjoyed one night of home hospitality. Koby stayed with a family on a kibbutz. “They gave us a tour of the facility,” he said. “It was definitely a neat place. They had a dairy on site and we got to see them milking the cows, definitely something you don’t see every day.

“It was also interesting to see the various facilities they had on the kibbutz, such as a day care and a building for older teens to hang out in,” he noted. “It was definitely a different culture than what we are used to.”

One of Koby’s favorite experiences was shopping in the outdoor market in Tel Aviv. “It felt like you were hundreds of years back,” he explained, “where everyone was a merchant and you bought your food from the local vegetable or fruit merchant, your fish from the local fisherman, and even your spices you could purchase there. It was a very neat atmosphere, and I wish that they had something around those lines here.”

The group also visited Tel Aviv University, which Koby described as “a beautiful campus and a place where many of us, myself included, decided that we would like to spend a semester or two in our future college studies.”

While Koby was exposed to a number of new experiences, he also found he had some commonalities with Israelis. “On the outside, Israelis seemed somewhat different, but on the inside, a lot of them were very similar. One of the Israelis I talked to the most was our security guard, Marta, who gave us the rundown of her life story and what she had done. She emphasized how she loved to travel and see the various sites of the world. Something I found similar to myself. And she was also just a fun-loving individual and I could have seen her staying in America and feeling completely normal in that setting.”

Koby had a bit of an adventure when he tried to track down his “long lost cousin, Adam Eisen,” who was also a March of Living participant. “Originally, I had thought he was from Montreal,” he said, “so I was asking the Montreal people if they knew him.

“The Canadian delegation, specifically the cities of Montreal and Toronto, sent huge numbers of kids on this trip, somewhere around the lines of 250-300,” he said. It turned out Eisen is from Toronto rather than Montreal, so, Koby continued, “I managed to thoroughly confuse the staff from that city as well as embarrass myself. When eventually I figured out he was from Toronto, it turned out that every Canadian I had asked about him immediately knew who he was.” The hunt turned into “a scavenger hunt of sorts in old Jerusalem.”

Koby returned to Louisville with a desire to learn Hebrew. “I don’t like not knowing things,” he explained, and he found himself thoroughly annoyed “when I had no idea what anyone was saying when they spoke Hebrew.”

Thinking back to the first part of the trip, he added, “I also brought back a greater appreciation for what had happened during the Holocaust. They tell you stories in school, give you statistics and show you pictures, but those really cannot compare to seeing things in person.

Koby looks forward to speaking about his experience at school and in the community and he’s glad he had the opportunity to participate in the March of the Living.

“I would like to thank the Jewish Federation for giving me the opportunity to go on this wonderful trip,” he said, “and I would like to encourage all future teens who may be interested to definitely seize hold of this opportunity, grab it by the horns and take the journey. You won’t regret it.”

[by Stew Bromberg, Vice President and CDO, Jewish Federation of Louisville] When I started working in the Jewish community 20 plus years ago I remember everyone telling me that ‘things’ are quiet during the summer and it is the time …

Come to “A Taste of Melton” to experience adult Jewish learning before you sign up Melton is back. The Florence Melton Adult Mini-School, one of the Jewish community’s most highly regarded adult education programs, will be offered again this fall …