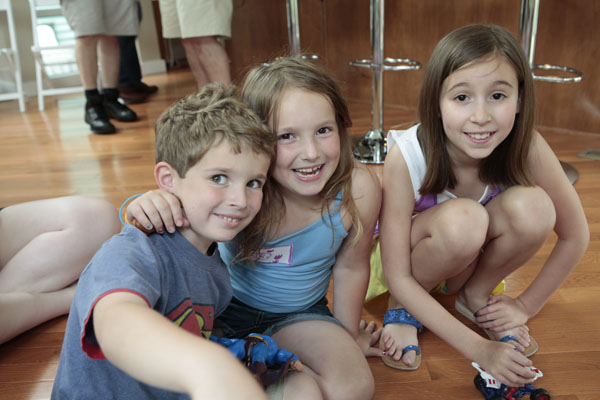 On Sunday, June 10, Ben Gurion Society Co-Chairs David and Elizabeth Kaplan welcomed members of the group into their home to celebrate their very generous support of the 2012 Annual Federation Campaign. Ben Gurion members had the chance to socialize with other members and their families while enjoying an appetizer buffet and drinks.

While JCC camp counselors entertained children at the event, the Kaplans discussed the great importance of supporting the campaign and their gratitude for all of the opportunities that the Jewish community is able to provide. This was followed by presentations from Jewish Family and Career Services (JFCS) and Hillel,  both supported by the Annual Campaign.

Judy Tiell, JFCS Executive Director, read vignettes based on the true stories of three families in the community who were helped by JFCS. One was a very touching letter written by a 10 year old whose family turned to JFCS for support. (The letter is reprinted on page 5.) The other two stories told of a young woman in an abusive relationship and a child displaying bullying behaviors. In both cases, the families were given assistance through JFCS. The support of the Ben Gurion Society and other donors allows JFCS to provide all of their services on a sliding scale, enabling them to assist those who cannot afford to pay.

Gariy Ocheretner, a student member of Hillel spoke on the many opportunities he has been given through the Birthright Israel program and Hillel. After high school, services such as these have helped him continue his Jewish journey. He thanked the donors for their support of the Jewish community, which allows programs like Hillel to flourish.

Stew Bromberg, JCL vice president and chief development officer, addressed the group and reflected on the power of the stories that had been presented. He thanked everyone for their leadership and involvement in the community. Stu Silberman, JCL president and CEO, also thanked the group for their contributions and David and Elizabeth Kaplan for hosting the event.

The Ben Gurion Society is open to YAD (Young Adult Division) members, ages 45 and below, who make a commitment of $1,000 or more to the Annual Federation Campaign. Every donation to the annual campaign makes a great impact in the Jewish community, and members of this exclusive society take a leadership role, going above and beyond to strengthen and support the Jewish Community of Louisville.

After the event, families were invited to attend a free, family-friendly Cherokee Triangle Summer Concert in Willow Park.

In recent years, Africans have made their way to Israel, a journey that is extremely perilous.  To get to Israel these people have had to walk long distances, risk being killed by bandits and the Egyptian government (which shoots these …

Editor’s note: This is the letter from a client of Jewish Family & Career Services that Executive Director Judy Freundlich Tiell read at the Ben Gurion Society event. What tzedakah means to me. When I turned 10 years old, I …