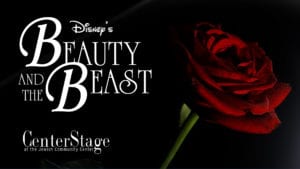 Dancing and singing dinnerware, a beautiful and smart girl, and a troubled and scary beast come together to tell a delightful French fable that teaches as well as entertains.
CenterStage kicks off its 2019 season on July 18 with Disney’s Beauty & the Beast, a main stage event for all ages.
Written by Howard Ashman and Tim Rice, with music by Alan Menken, and based on the book by Linda Woolverton, Beauty & the Beast is the stage version of the 1991 Disney animated film, which retold the French fairytale La Belle et la Bête, written by Jeanne-Marie Leprince de Beaumont around 1756. Leprince de Beaumont’s version is closest to the modern story, but she adapted it from the original written by Gabrielle-Suzanne de Villeneuve in 1740.
“It’s that classic tale of Belle wanting more, wanting adventure and meeting the Beast, of course, but looking past his exterior and finding the true man on the inside, a man of heart,” said CenterStage Artistic Director Frank Goodloe III. “One of the things that I told the cast was that, yes, this is the classic Disney tale, but I want to really, really get the message across to never judge someone just by the way they look or what you hear that they are. Get to know the person. It’s what in this world today we really need.”
This show was one of the most difficult to cast, Goodloe said, because of the sheer volume of talent available. So many people wanted to be in the play, and to portray Belle in particular.
“I think for a lot of people, Belle was the first princess they fell in love with,” Goodloe said. “Because Belle is spunky. She’s not afraid, she wants more than what she has. I think that a lot of kids and a lot of people relate to that.”
Because it’s Disney, it’s a big production, Goodloe said. The set will be big and beautiful, and the costumes, including dancing dinnerware and furniture, will be showy.
“Set-wise, it’s going be very elaborate,” he said. “It’s Disney, so it’s going to be elaborate, and cartoonish, and great.”
The actress playing Belle is more than prepared for her role. Kristie Buckley has portrayed Belle at Walt Disney World and on Disney Cruises. Her last role at CenterStage was in “Seussical: The Musical” in 2010, but she moved to London for a while. Now that she’s back, she’s ready to step into the provincial French countryside.
CenterStage regular Alonzo Richmond will play Beast, who is actually a prince who has had a spell cast on him that can only be removed when he finds true love.
David Galloway, who was Sir Lancelot in “Spamalot,” will play Gaston, the self-centered, sexist bore who pursues Belle. Mrs. Potts, the talking teapot, is played by Kristy Calman, a CenterStage regular, who celebrates her 20th straight season with CenterStage.
There will also be Belle’s Enchanted Party, at which kids can meet Belle and her friends before the Sunday matinees. Kids younger than 14 will get a light lunch, make a craft and get their photos taken with the actors in costume. Participants will get first seating at the matinee show.

Want to go?
Disney’s Beauty & the Beast runs from July 18 to Aug. 4 in the Linker Auditorium at The J. Tickets are on sale now at the front desk or online, including tickets for Belle’s Enchanted Party.