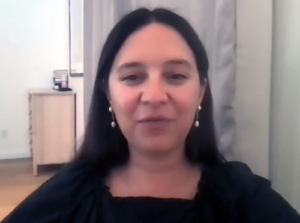 When a gunman entered the Tree of Life synagogue in Pittsburgh on Oct. 27, 2018, opening fire and killing 11 worshippers, Bari Weiss felt as though something important in America had changed.
The Pittsburgh native and award-winning journalist, who had celebrated her bat mitzvah at Tree of Life, called it an “oh, no” moment, sensing that the stability and security Jews had known in this country might be shifting.
Two years later, she feels that “oh, no” fear more than ever.
“I have felt more of a sense of alarm over the past few weeks now than I did in the aftermath of the attack on my synagogue,” said Weiss, in an unspoken reference to the recent fighting in Israel that pitted Jews against Arabs on both sides of the Green Line.
“Anti-Semitism,” she said, “has moved from the lunatic fringe firmly into the mainstream of American cultural life and into the halls of Congress.”
And cancel culture is the latest weapon wielded by the forces of Jew-hatred, Weiss said.
Weiss, a former New York Times opinion writer and author of the book, How to Fight Anti-Semitism, was the guest lecturer at a virtual program on Sunday, June 6, called “Cancel Culture Through a Jewish Lens.” Adath Jeshurun co-sponsored the event with nine other synagogues, federations and JCCs across the country.
“Whether I agree or disagree with her writing,” Rabbi Robert Slosberg said in introducing Weiss, “I always admire her for being eloquent, thought-provoking, and yes, at times, outspoken. She really challenges me to think out of the box.”
Weiss warned that many people are taking the cancel culture phenomenon too lightly, noting that it is redefining – for the worse – how people view Jews, Israel and Zionism.
Questioned by the moderator, Rabbi Jason Nevarez of Congregation Beth Israel of San Diego, Weiss described cancel culture as “the latest form of ostracism or exile” – a way of punishing those who do not get in line with a newly drawn bonds of normality.
She said cancel culture is occurring on the left and right wings of American life, noting the recent vote by the House Republican Caucus to strip U.S. Rep. Liz Cheney of her leadership role.
For her talk, Weiss focused on how cancel culture is being felt in liberal circles. She said most Jews live in Democratic or “blue” areas, and young Jews are overwhelmingly liberal or progressive.
One of the “litmus tests” for cancel culture promoters on the left is Israel and Zionism. Weiss said Jews who are pro-Israel, or at least seek to correct misconceptions about the Jewish state are being publicly branded as racists.
One example of these cancel culture attacks happened recently in Louisville, when Jewish members of the social action group Parents for Social Justice were smeared online and blocked from the group’s social media when they tried to correct false statements about Israel. (See story, this page).
“If you want to be a member of what David Hirsch, the British scholar, calls the community of the righteous, the community of the good, you cannot be a Zionist,” Weiss said of the cancel culture, “because to be a Zionist, according to this ideology, is to be a racist.”
Weiss said advocates of cancel culture on the left are trying to do more than just “cancel Israel.” They paint Israel as the last bastion of white colonialism.
“They are trying to open up a gap in which anti-Semitism thrives, but they go further than that. They’re basically saying Zionism is racism. Well, if Zionism is racism, Zionists are racists, and everyone knows how we should treat racists; we should publicly shame them.”
A graduate of Columbia University, where she encountered anti-Israel/anti-Jewish sentiment herself, Weiss said she is particularly concerned about young, college-age Jews who are being put to “an extremely painful test.”
“[If] you want to not be canceled,” she said the test goes, “you want to not be ostracized, you want to be sitting at the cool kids table; you want to sit at the table with the people who are on the right side of history; no problem … but you need to disavow Jewish power and you need to disavow Israel.”
That test, she said, is leading to all kinds of “disavows.” Many young people are even disavowing Hebrew, claiming that Yiddish is the “morally pure language.”
Rabbi Nevarez, the moderator, framed cancel culture as “a new kind of evolved anti-Semitism.”
“It feels different, very different in this moment,” he said. “The values, propositions that we took for granted; the fabric of foundational American liberties that we took for granted as a Jewish community, has shifted.”

Members of NCJW, Louisville Section, marked their milestone 125th anniversary on Tuesday, June 15, with a celebration at the base of the Big Four Bridge. Among the guest speakers were Kentucky Lt. Gov. Jacqueline Coleman and Louisville Metro Councilwoman Cassie …

By Michael Ginsberg For Community When leaders of Temple Israel in Omaha met with Muslims to find a partner in relocating to another neighborhood, they brought baked goods. No surprise. So did the Muslims. A good omen. That meeting grew …