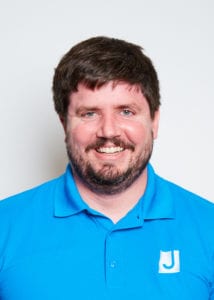 A self-described “pool rat” since he was a kid, Johnny Kimberlin has made a career at The J, working here in some capacity since 2006.
He’s been the aquatics director – his current job – the assistant director, a lifeguard and a swim instructor. He’s even done the “honorable” job (his word) of pool maintenance.
As director, a job he’s held since 2014, Kimberlin has overseen steady growth in the aquatics program, thanks largely to J Swim school and the Gators – The J’s entry in the Louisville Swim Association, which is poised to move from Divisions 3 to 2 after this year.
Kimberlin expects 110 kids to be signed up this summer for the Gators. J Swim has 130 kids, which is up significantly from its previous incarnation as the Lenny Krayzelburg Swim Academy.
During the summer, he’s in charge of 40-some lifeguards, 25 instructors, four coaches, at least one pool maintenance worker, and a staff of 10 at the diner.
And yet there are still days when, working with shorthanded staff, he will climb into the lifeguard’s chair himself or take a swim class. Why not? He’s done it all.
“It keeps me busy,” Kimberlin said. “All my employees are good kids and young adults. It’s been fun.”
The growth in the aquatics program is driving the need for newer, up-to-date pools. That’s why Kimberlin is doing full gainers over plans for the new J, for which ground could be broken by the end of the year.
“These programs are going so well that we need more space year round,” he said, “which would allow more time to teach and coach, and more space for members to lap swim…. All that’s coming with the new pool.”

A Louisville native, Jordan Green touched all bases of Jewish life while growing up.
“I went to Sunday School and Hebrew School. Many of my best friends were Jewish and I met them through those activities. I went to the JCC almost every day,” playing basketball there among other activities.
“Jewish activities formed my social life as I was growing up, I would say.”
While he didn’t stay active when he went to college at the University of Texas or law school at Indiana University, that changed when he and his wife, Abby, also a native, moved back to Louisville.
“I was more reflective of the things that shaped me as a person, all the activities that were given to me because of the Jewish community in the city,” Green said, “so I thought, why not give back?”
First he joined the board of the Jewish Family & Career Services, a panel he’s now served on for five years.
“I like how it’s not just focused on the Jewish community; it’s focused on all the people in our community who need help, need some personal strengthening. I think that’s part of being Jewish in the first place. I like that messaging, and I think we stay true to that in our services.”
He also stepped into JCL activities, serving on its endowment and finance committees.
He said his recipe for volunteering centers around networking.
“I enjoy networking and meeting people, determining where there’s a need and where my skills can fit in with that need” Green said. “I’m happy to step in and help where I can.”
An attorney and in-house counsel for Louisville-based Charah Solutions, which does environmental construction law for utilities, Green, 32, has a background in corporate law. His wife, Abby, also is an attorney, in private practice.
In retrospect, Green credits his father, Dr. Ralph Green, vice chair of the JCL Board of Directors, for instilling his will to give back to the community.
“It’s something I didn’t recognize growing up,” he said, “but I know how important it was to him. He always talked about it and I didn’t really understand untiI I grew up how much work he and people like him put into it.”

Cari Hatch comes by her commitment to Jewish leadership in two ways: She has a strong family tradition of leadership in the community, and she took a life-changing trip to Israel.
Hatch, this year’s recipient of the Lewis W. Cole Memorial Young Leadership Award, is the granddaughter of David Kling, the great-granddaughter of Arthur Kling and great-great niece of Morris Kling – all past presidents of the JCC.
“I have a lot to live up to,” she said.
In addition, she went to Israel in 2017 with the Jewish Women’s Renaissance Program’s Momentum mission – an experienced their deepened her bond to the community and other young women who are in it.
“The trip just inspired me to want to do more in my community, which is why have been so active over the past year and year and a half.
During that time, Hatch has co-chaired the Community Telethon. She helped organized the March 17 Challah Bake, and she is taking an increasingly with Camp J, attending a retreat with Director Mindye Mannel and assisting with recruitment. A mother of two campers – her son Cooper and her daughter Chloe – she spoke about the experience at the May 15 event with Chef Michael Solomonov.
“It’s leading by example,” Hatch said, “showing Chloe and Cooper what the community means me and my family. Hopefully, they will follow along.”
Beyond the J, Hatch has been an active member of Temple Shalom through fundraising and simply as a Jew in the pew.
“I feel like just being an active member and going to services shows it’s not just older people coming.”

The incoming chair of the Jewish Community Relation Council, Beth Salamon, this year’s Linker Award recipient, hopes the prize makes a statement about the what about Jewish Louisville she values most.
“Having its own community service award shows how community service as an important Jewish value,” Salamon said. “it makes a statement…. Each award sets the tone for what we think is important, so I’m thrilled by the community service recognition.”
The Jewish Community Relations Council is Jewish Louisville’s liaison to the greater Louisville community.
Salamon is an old hand at policy work. The mother of two serves as the state policy advocate for the National Council of Jewish Women in Kentucky, monitoring bills in the state legislature that pertain to reproductive rights and other matters critical to women.
She also serves on the Collegiate Board of Trustees, and its Parents Association board. She has been on the JCRC for 10 years.
A native of Bucks County, Pennsylvania, Salamon went to college in Washington, D.C., and law school at Temple University in Philadelphia. There, she met her husband, Michael, who was in medical school at the time.
After she spent a couple of years clerking for the family court of New Castle County, Delaware, the couple moved to Sacramento, California, where Michael started a five-year residency and Salamon worked for the Legislative Council of California, writing and modifying bills for lawmakers in the areas of public safety and food & agriculture and staffing those particular legislative committees.
They spent a year in Iowa City, Iowa, where Michael held a fellowship at the University of Iowa, before moving to Louisville in 2005. Michael is an orthopedic surgeon with Ellis and Badenhausen Orthopedics.
In addition to Alex, the couple has another son, Jack, 14, a freshman at Collegiate.
As JCRC chair, Salamon hopes to help the members “find avenues for them for more hands-on volunteering.” 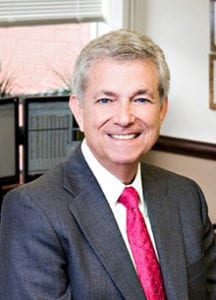 Bruce Roth comes by his passion for volunteering naturally.
It’s a family tradition,” he said, “to give both our time and money to family-supported organizations. Whether we volunteer our time or not, we try to provide an economic benefit to those organizations we support.”
Both he and his wife, Marcia are active in the community. So are his siblings, and all their children.
“We’re very proud of them, Roth said. “They give both of their time and money as well, and they’re teaching their children to give back to the community. It’s a wonderful tradition, and we are very grateful that our parents started it.”
Roth is this year’s winner of the Ronald & Marie Abrams Volunteer of the Year Award, an honor named for two people who Roth credits for getting them active in Jewish Louisville once they moved back here in 1970.
“Marie and Ronnie were instant friends,” Roth said. “You don’t stay friends with Marie and Ronnie without being influenced by their involvement.”
His involvement that year started when Keneseth Israel not only asked him to join the board but become its treasurer.
“Kind of a natural for me as an accountant,” Roth said.
He would soon join the board of the Jewish Heritage Fund for Excellence and has serving on the JCL Endowment Committee.
He also has served on the board of the Louisville Orchestra for 10 years, eight as a member of its nominating and governance committees and other panels. He credits Denise Schiller for getting him active with the orchestra.
A career accountant, Roth is partner emeritus at Lewis T. Roth and Co., the firm his father established in the 1930s and today has 65 employees.
After going to school at Northwestern, where he and Marcia met, Roth worked at Arthur Anderson, but the couple decided to move back to Roth’s home town after 10 to work for his father escape the Chicago winters.
“It was a great business opportunity, and it was not Chicago,” he quipped.
After a lifetime of volunteering watching the generations after him renew the family tradition, Roth said giving back is its own reward.
“I guess I was raised with that belief, that you have to give back to the community, and the more you give back, the more you appreciate the results.” 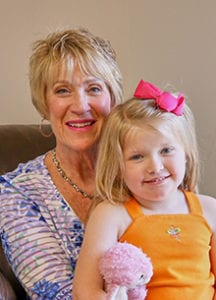 Victoria Carpenter arrived for her interview with an entourage: her 4-year-old granddaughter, Jenny.
“She helps me with the meals,” Carpenter said as Jenny sat on her lap clutching her bunny, Strawberry, and Aurora from The Little Mermaid.
Those “meals” are the ones prepared at the J that Carpenter delivers twice a week as part of the Meals on Wheels program here. She’s been making deliveries – and friends – for 10 years now.
Carpenter began taking Jenny on her deliveries when the girl was just a baby in a carrier. “The seniors really perk up when they see children, and Jenny has a nice personality and smile.”
Carpenter’s deliveries are something of a family affair. In addition to Jenny, grandma brings her other grandkids when they’re in town.
And her husband, Walt, used to help with the deliveries. He even made friends with a man on the route. But when that man died, Walt found it too hard to continue.
Carpenter said you have to be prepared for that kind of thing when you do this kind of work.
“It was hard,” she said of her husband’s experience. “He’s a very sensitive person, and it was hard on him.”
Likewise, Carpenter finds the work much more than delivering meals.
“I talk to them, listen to them,” she said of her clients said. “We don’t get close to everyone, but there are some people who want to reach out to you.”
And they’ll tell you just about anything, about their children, grandchildren, how they met their spouses.
It’s important to listen, she said.
Carpenter didn’t just suddenly develop an interest in seniors. She worked at the Veterans Administration Hospital for 33 years, the last three in the geriatrics department.
When she finally retired, she looked for something to occupy her time. She saw a newspaper ad for meal deliveries, and she signed up.

Republic Bank
Corporate Friend Award
Republic Bank has been a valued partner of JCL for many years. As a corporation, they have supported our organization, providing sponsorships, annual support and volunteer leadership. CEO Steve Trager and the Trager family recently pledged their support to the J Capital Campaign with the first family lead gift, building credibility and confidence in the effort. This was a transformational gift to the organization.