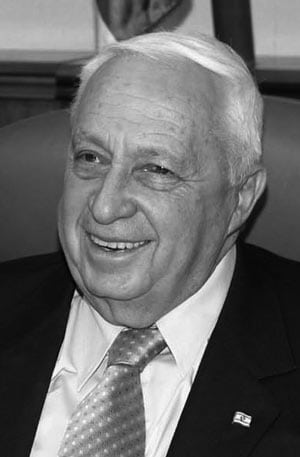 Ariel Sharon, the lion of God, as his Hebrew name suggests, left us twice. He departed us eight years ago when he fell into a coma. This past Saturday he left us for good. As my hero, his memory is still alive as I reflect back on years past. His name was associated with daring and courage.

Growing up in Israel, the ultimate test for one’s fiber was to cross the Jordanian border without being detected, slip into Petra – the ancient Roman city – and return home with an undeniable proof characteristic of its landscape, a red rock. Arik, we were told, did so more than once. He captured my generation’s imagination throughout our childhood years and for years to come.

My memories of this legendary strategist have to do with his military brilliance as a field commander. For me, he was a modern day Shimon Bar- Kochva.

We first crossed paths while positioned on the Suez Canal during the War of Attrition in 1970. I was a member of an airborne battalion just out of a grueling 14-month booth camp. Arik was in charge of the Southern command, overseeing all operations on the border with Egypt including the Sinai Peninsula.

Little is known about this bloody and costly war. Isolated and far from home for months, and buried in underground massive bunkers during the day, we were no different than groundhogs.

At night, we ventured out for various reconnaissance missions, and various other “crazy” activities aimed at signaling to the Egyptian army, a few hundred yards across the canal, that we were there too – so better keep away!

As young soldiers, we faithfully carried out such missions despite some lingering doubts about their rationale and effectiveness. Arik’s name was often mentioned by our commanders stressing that those were Arik’s tested tactics. Thus, they work!

In retrospect, those activities kept the Egyptians glued to their positions until the Yom Kippur War years later. We saw Arik once during that dark period but his presence loomed large each night; and even more so each time the other side succeeded in crossing over undetected and ambushing our nightly patrols, causing us massive casualties. Despite some heavy losses, our morale was high convinced of his strategy and wisdom. We prevailed.

Faith and fate had me serve under his command three years later during the Yom Kippur war in 1973. Still an unassigned young captain, I was ‘thrown’ into an unusual ‘unit’ comprised of other young officers waiting for a final assignment. We were known as the officers pool.

Being moved by the high command from one front to another during the confusing first bloody days of the war, we were finally flown south and joined the units to be led by the greatest field commander Israel ever had – Aluf Aric Sharon.

Words cannot describe the feelings we all experienced once we realized where we were and what was expected of us. We were part of the force that was supposed to cross the Suez Canal, establish a beachhead – a passable secure bridge – and allow the flow of other divisions north and south in a critical maneuver aimed at encircling the enemy’s 2nd and 3rd Armies.

The awesome message was simple and straightforward: the state and the people of Israel’s existence depend on the success of the division under the direct command of Arik. And boy what a delivery this was.

Despite heavy casualties, Arik’s strategy paid off as we delivered such a surprise blow to the enemy’s high command that brought the 3rd Army to its knees. The Lion of God formulated the move and executed it in a way that changed the dynamics of the war and sealed its end.

Arik was the right commander, at the right place, at the right moment. Such rare alignment was a historic turning point that helped us all recover and regain control. It was a morale booster for the troops in the front and our families back home. In Israel, after the war, Arik was now “Arik Melech Yisrael” – the Lion King of Israel.

Reflecting back on those awesome moments as I write these words, I can still hear his unique voice that was briefly heard through our communications gear. His pronunciation of the Hebrew ‘R’ – so unique to the Sabra born and raised in Israel – is still ringing in my ears some 40 years later.

Arik was a complex and a controversial leader during both his military and political careers. Some adored him while others despised him. Yet, they all agree that he was a brilliant strategist, a problem solver, and a decision maker and a leader.

A towering figure in the country’s modern history, he will always be my hero. Arik, you left us but I can still hear your voice ringing in my ears.

Editor’s note: Shalom C. Malka is currently a professor of business at Sullivan University’s Graduate School and can be reached at smalka@sullivan.edu. He was born in Casablanca, Morocco, and moved with his family first to France and then to Israel in the 1950’s. He served in the IDF for four and a half years and studied at the Universities of Haifa and Tel Aviv.

He came to Louisville and served as a shaliach (emissary) to the community from 1980-82. Later, he returned to the U.S. and earned his doctorate from the University of Pittsburgh before joining the faculty of the University of Haifa in Israel.

When he took a sabbatical year, he returned to the U.S., married, had two daughters and chose to stay in this country, returning to Louisville, his wife’s hometown, in 1990. He was co-owner and later president of Gingiss Formalwear in Louisville and Indiana.

David Nathan Klein, 57, died December 29 at MD Anderson Hospital in Houston, TX. He was born and raised in Louisville, was a 1974 graduate of Waggener High School, and attended Ohio Wesleyan University and the University of Kentucky. David …

Your Jewish Community Relations Council, a part of JCL, serves as an interface between the Jewish community and the general community on a wide variety of topics. Of course, we are not alone in this regard. The rabbis and cantors …

David Klein. What do you think of when you hear is name? Enigmatic? Lightning rod? Trailblazer? Inexplicable? Surprising? Unpredictable? Hilarious? Incomprehensible? Devoted? Loyal? Missed? These sentiments begin to describe him, but only having known him can you understand that he …