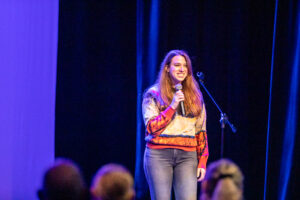 Ariel Elias – yeah, her, the comedian who, after narrowly dodging a brew-filled projectile hurled at her during a recent South Jersey gig, chugged its contents on stage to the astonished delight of YouTubers everywhere.

It’s fair to say that this 30-something product of Lexington, Ky. can give loads more than she can get. In other words, don’t mess with this woman. She’ll outmaneuver you before you can even think about ordering a second round of alcoholic libations.
There was no such brew-bombing last night, at least at the first of two shows Elias gave before a sold-out audience gathered inside the Shapira Foundation Auditorium. Having already been appropriately lubricated via local comedian Justin Tabb’s deft, make-zany-fun-of-myself warmup routine, patrons (some seated on bleachers, others occupying coveted tables near the front) were primed: Let the craziness begin.
The best thing about this woman is that she’s a comedian first, a Jewish comedian second. Yes, this was a show delivered in a place where the crowd, presumably, could identify closely with her faith. But her observational comic methodology was as far from creaky Borscht Belt prototypes as one could imagine. Elias is a thoroughly modern wielder of wit.
During her 8 p.m. show Saturday night, dressed casually in jeans and a color-splashed sweater, she pivoted shrewdly among subjects that  — as the evening progressed, grew edgier without ever veering into crassness. Few comedians of any background could riff about circumcision in one instant and menstruation the next, and make it all seem as wholesome as Grandma Sadie’s Passover brisket.
Of course, when you’re newly married and living a pet-infused Brooklyn life, potential laugh-fodder is everywhere – as are the foibles of the male species.
Consider the following scene in Elias’s Brooklyn apartment: “Last week, our dog threw up on the carpet. And then my husband cleaned up with a dustpan and brush,” she recalled. Big laughs ensued, but Elias was savvy enough to let the laughter build until it was just about to subside before delivering her zinger: “That’s something only a man would ever do.”
Ouch. And yup.
Or taker Elias’s musings on another male-centric dynamic: ritual circumcision. Yes, she explained, it’s the fundamental sign of the covenant between the Almighty and the Jewish people, but hey – it does raise a few thorny issues, and makes God out to be a bit of a severe fellow.
“A lot of the Bible is God being very petty and insecure,” Elias says, “going up to every guy and saying, like, ‘Do you love me? Prove it!’”
Mentioning a group who are virulently opposed to circumcision, Elias admitted a tinge of envy. “What makes me mad is they have a name for themselves, and it’s really good. I’m genuinely mad at how good the name is. They call themselves ‘Intactivists’” Big laugh. “But they were so mean to me I call them ‘Foreskinheads.’”
Ka-ching!
The whole evening was much like that. Self-deprecating enough to mine comic platinum out of having contracted herpes from an unrepentant ex-boyfriend (“I feel like it wouldn’t sound nearly as bad if it wasn’t plural – if I was up here and said, ‘I have a herp’”).
More and more riffs spilled out, on body image (“I’m very much built for the old country – I’m for the ox diet so I can pull a cart”), dating, or sitting next to a an ultra-Orthodox Jew on the subway when the car lurches and he – unable to keep from brushing up against her – recoils in semi-horror.
“I used to call them ‘Extreme Jews,” Elais says, “but that sounds so cool. It sounds like a guy who goes skydiving, and he gets on the ground and chugs a energy drink called Mountain Jew.”
Inevitably she turned to the beer-hurling incident, when the husband-half of a couple in the audience took apparent offense a joke alluding to abortion, and decided to launch a can in her direction.
“I’d thought it was the woman I was having the back-and-forth with,” Elias said told her show audience last night. I thought it was her” who threw the can. And as a human being I was appalled and it was very scary. But as a feminist I was like, ‘Hell yeah – break the glass ceiling with whatever tools you have!’”
Proving that even scary stuff can have an upside, the incident was posted on YouTube and got enough attention that, on Oct. 25, Jimmy Kimmel had her on his show.
“After the show he called me aside and said, ‘This has all been so crazy for you – has your career taken a bump from this?’ ‘And I said, “Yeah, actually, I don’t know if you heard, but I just did Kimmel.’”

read about Elias’s Meet and greet