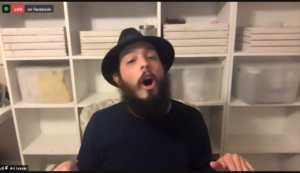 Ari Lesser has no problem telling you what kind of Jew he is:

He goes on for a while like that, but you get the idea.
Lesser, 34, is a rapper, and he’s laying down some knowledge about being a Jew. His videos have attracted as many as 500,000 views.
In his Feb. 14 appearance on Adath Jeshurun’s Sunday Night Live program, the Cleveland native rapped about Shabbat, Purim, giving thanks and the eshet chayil (woman of valor), to name just a few topics.
To be a Jew is to be all about gratitude, Lesser said.
“To give thanks to HaShem is really the essence of Yehuda and Yehudim,” he said. “If we’re not being grateful and if we’re not showing gratitude, I can honestly say you’re doing it wrong; you’re not doing Judaism right.”
His raps also get political, touching on BDS, the Holocaust and double standards affecting Israel.
Particularly, he rapped about Middle Eastern Jews, how the wave of Jewish refugees from Arab countries following the 1948 War for Israel’s independence receives scant attention, compared to the plight of the Palestinians, and how critics are not always aware that Jews are indigenous to the region:

“Jews are indigenous to the Middle East
and all we’re asking is for a little peace.
Been oppressed ever since we were dispossessed
enslaved, arrested and put to death.
But we persevered never disappeared
been in Israel for thousands of years.
Thank God we’ve been able to overcome
still living in the land where we come from.”

Not that he is intolerant of criticism of Israel. He leaves up critical comments on his YouTube videos if they are constructive and generate discussion. He even raps in one song about understanding the longing Palestinians feel for returning to the places where their families once lived.
But he draws the line at vicious anti-Semitism and Holocaust denial – themes that he targets with his razer-sharp raps.
“There’s just crazy, racist anti-Semitic people out there,” he said between songs. “People really, strongly believe things like the Holocaust never happened…. I have gotten into intense arguments with people…. They really believe this is a fraud that’s being perpetuated on the world.”
So he wrote a song addressing the Holocaust and the strident way so many people deny that it happened:

“Now Nazi Germany had a fixation
on attaining racial purification.
They wanted a white bread Aryan nation
no place for Jews in their civilization.”

The song is a history lesson of sorts, rhythmically teaching about Operation Reinhard, the cattle cars, the examinations upon arrival in the camps. Its format is graphically like Billy Joel’s We Didn’t Start the Fire.
“Wow, I think that’s the first rap I’ve heard about the Holocaust,” Cantor David Lipp observed at the end of the song.
Lesser can keep it light, too. He can rap on the spot about any animal his audience names. This night, he came up with hilarious lyrics about dogs, cats, goldfish, octopuses, even pterodactyls.
And he can poke a little fun at his own people, as he did in his Shabbos rap:

“Gotta get going
because I like showing
up early for shul
so that can read slow
and I’m saying the Shema
do the Amidah swaying
staying focused to keep
up with the praying.
The chazan is cruising
so fast it’s confusing
and most of the Jews in the back
are just schmoozing.
But soon we’re all crunching
on cookies and munching
that cholent and kugel
at the kiddush luncheon.
People start pouring
l’chaims ignoring
the speech by the rabbi
because it’s so boring.”

Lesser grew up in a culturally Jewish family in Cleveland Heights and studied political science at the University of Oregon, where he also connected with hip hop music.
He made his first visit to Israel in 2012 on a Taglit-Birthright trip, and stayed in the country for a year, studying in Jerusalem and Safed. While there, he became a Nazirite, refraining from cutting his hair or drinking wine. He also is a vegan.
He has written hundreds of songs, many of which are political and well-researched. In his song, Boycott Israel, an indictment of the BDS movement, he relied on information from Amnesty International and Human Rights Watch.
His rap – the lighter ones, the political ones, the historical ones – all touched some listeners. Midway through the program, Lipp told him that one woman, listening from her hospital bed, had texted on Facebook that “this is just what she needs.”
So just for her, Lesser rapped a rhyming version of Psalm 20, which many Jews say when praying for a refuah (recovery):

“May HaShem answer you when things go wrong.
May the name of Yaakov’s God keep you strong.
May he send you help from the holiest place.
from Zion may he support your case.”

Human Resources Lee Chottiner As a kid growing up in Pittsburgh, what I knew of Rabbi Dr. Abraham Twerski came exclusively from the 6 o’clock news. I knew he was a doctor, a rabbi and, of course, a Jew. I …