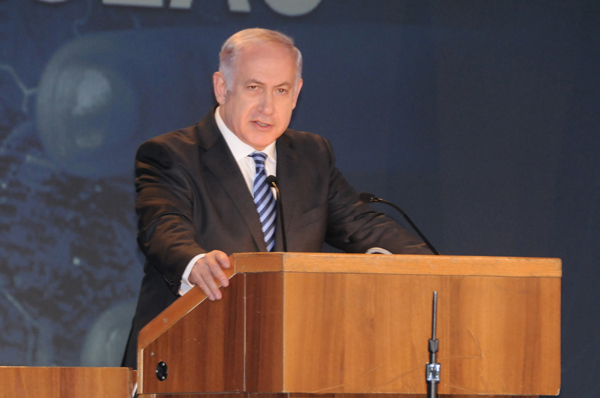 When more than 3,000 Jewish leaders from across North America gathered in New Orleans from November 7-9 for the 79th Annual General Assembly of the Jewish Federations of North America, they found a program that reflected the vast diversity of the delegates themselves and the communities they represent.

There were big name keynote speakers including U.S. Vice President Joe Biden, Israeli Prime Minister Benjamin Netan-yahu and Israel’s opposition leader, Kadima Party Chair Tzipi Livni. There were traditional and egalitarian worship opportunities. There were many workshops that addressed issues from leadership development and fundraising to efforts to delegitimize Israel and the threats posed by Iran to what the Jewish community is doing in Haiti and how to use social networking to build community. And there were opportunities to do tikkun olam projects in the still-devastated city.

There were teens there for the BBYO track, including Louisville’s Sarah Ensign, who is the KIO (Kentucky-Indiana-Ohio) regional president. There were college students there for the Hillel track, including a delegation of seven from Louisville. (See Adit Herscovic’s account on this page.) Young Leadership Award winners from communities around the country, including Louisville’s Julie Ellis and Jeff Tuvlin, and Lois Kohn Claar, daughter of Robert and Margie Kohn, who were honored. The International Lion of Judah Conference was held right after the GA, and Kipnis-Wilson/Friedland Award winners from across the country, including Louisville’s Cheryl Karp, were honored for their contributions to women’s philanthropy and volunteerism. There were programs for community professionals, too.


“It was my first GA,” said JCL President David Klein, “and it was an overwhelming experience.” He was moved by the broad cross section of people from Jewish communities across North America and overseas, “all coming together for one cause – to create a stronger, united Jewish community.”

Jim Ensign was particularly pleased that JFNA made such a strong effort to attract and involve Jews of all ages in the GA. His own family illustrated this fact. He and his wife, Julie, were part of the Louisville delegation. Their son, Daniel participated in the Hillel track, and, as noted above, their daughter, Sarah, participated in the BBYO track.

“There were over 600 Hillel students participating in the GA,” he observed, “and almost 100 BBYOers. … It was exciting to see how on a broad basis the national organization is committed to doing things differently to engage people and keep them engaged.”

This was JCL Board member Julie Ellis’ first GA. “It was truly terrific,” she said. “It’s an exciting environment that broadens your scope and reminds you why you like to be involved in the Jewish community and why it’s important. … Everybody is proud and excited to be a Jew.”

JCL Vice Board Chair Jeff Tuvlin found it invigorating and exciting to be around other Jews, and it was good “to discuss the successes and challenges in their communities.”

Many members of Louisville’s delegation spoke about the big name speakers. JCL Secretary Karen Abrams was encouraged by Vice President Biden’s message. “He talked mainly about Iran and the nuclear threat” that country poses to Israel and the entire Middle East.

Abrams said Biden clearly stated, “‘As long as there’s a breath left in my body, I will support Israel.’ I know President Obama supports Israel,” Abrams continued, “but to hear him [Biden] speak so emphatically was really encouraging.”
For Julie Ensign, being in the same room with Biden and Prime Minister Netanyahu left her with a feeling of solidarity with the delegates at the GA and Israel.

Jennifer Tuvlin found both Biden and Netanyahu to be excellent, informative speakers. “I learned just how many people and countries are trying to delegitimize Israel and claim that Israel doesn’t have a right exist, and how prevalent this belief is outside the U.S.

“We should not be afraid to talk about Israel,” she continued. “There is no question that Israel has a right to exist and defend itself.”

Abrams was also impressed with Netanyahu whose speech was interrupted by anti-Israel protestors. He “was so composed and didn’t flinch” when the protestors were screaming at him, she noted.

Netanyahu’s speech focused on the growing threat posed by Iran. JTA (the Jewish Telegraphic Agency) reported, “Israeli Prime Minister Benjamin Netanyahu delivered a speech Monday calling for moving beyond sanctions to mounting a ‘credible military threat’ against Iran as a means of avoiding war. ‘Containment will not work,’ Netanyahu said.”

JTA analyst Ron Kampeas described the speech as, “a clear sign that Netanyahu feels empowered by the Republican sweep last week of the House of Representatives to trump the Obama administration’s emphasis on peacemaking with the Palestinians with his own priority: confronting Iran.”

“I appreciate the rare opportunity to hear Prime Minister Netanyahu,” Jeff Tuvlin said. “It was a wake-up call to discuss the threats to Israel from delegitimization efforts and Iran’s nuclear program.”

“Seeing Vice President Biden and Prime Minister Netanyahu was about as exciting as it can get,” Ellis said. “Netanyahu stayed at our hotel, so we saw firsthand the security detail.

“Hearing them was a learning experience for me,” she continued, and it motivated her to educate herself further about Israel’s policies and the issues the country faces. She also became more aware of Israel’s detractors and what they are saying about the Jewish State.

“Besides the excitement of the obvious thrill of being in the hall and hearing the support of Vice President Biden for Israel, the strong will of Prime Minister Netanyahu and the visionary thinking of Tzipi Livni,” Klein added, “being in their presence was inspiring.”

Another highlight for Abrams was a breakout workshop on how to engage the younger generation in the Jewish community through social media, fun events and service opportunities so they will come to understand the community and become the next generation of donors.

Julie Ensign also attended a workshop on engaging the next generation that “left me feeling like our community is on the right track as to what we’re doing and our focus. The need to engage youth is being talked about all over the country. If people are engaged when they are young, they have a greater tendency to be involved as they get older and to become givers.

“Our community,” she observed, “has Kesher, BBYO and the Teen Connection Program, and we’re having good participation in everything. That shows that there is a need and we’re doing programming in a positive manner.”

Jim Ensign, a marketing professional, said, “There was a lot of focus on how communities can use new media, especially the social media like Facebook and Twitter” and other online tools to reach younger audiences.

For Ellis, the GA provided an opportunity to connect with people from other communities to share ideas about common problems and strategies to cope. “It’s nice to hear we’re not alone in our problems or our successes,” she said.

One discussion, Ellis recalled, addressed how some communities dealt with decreased fund-raising. “They had to do a lot of soul searching,” she said.

“My biggest take-away from the GA,” Klein stated, “is defining what being Jewish is all about – the generosity of spirit, the unity, the emphasis on American Israeli relations and a desire to defend Israel in the eyes of the world. Without Israel, we are a rootless people.”

That message served to bring local issues into focus for him. “It brings greater validity and strengthens our mission here at home. The JCL can be a convener of the entire Jewish community, helping us live out our feelings and values.”

“We must, as a community, stop our interpersonal negative dialogue and come together for the benefit of Jews around the world,” Klein continued. When people allow their disagreements to affect their commitments, “ultimately it means a family in the Ukraine won’t have food for the winter.”

Klein returned to Louisville with an increased commitment to ensuring the JCL is inclusive and responsive. He would like to see increased dialogue, perhaps in the form of town hall meetings at synagogues, and he plans to tap into national resources for facilitators and other support services.

New Orleans was chosen as the site for this year’s GA to showcase what the Jewish community has done to help the city recover in the five years since Hurricane Katrina and how much more needs to be done.

The Hillel students undertook hands-on clean up projects in the lower ninth ward. The adults also did service projects. Abrams said her group “delivered backpack with books and read to kids.”

The delegates also toured the region and were briefed on the help various Jewish organizations have given the city. One example Abrams cited was Jews for Justice, an organization that issued small business loans to New Orleans residents when all the banks had been closed by the storm’s devastation.

“The GA reminds us that we are part of something so much bigger than the Jewish Community of Louisville or the merger,” Jeff Tuvlin observed. “Our community needs to reinvigorate our relationship with the greater Jewish community worldwide and to our commitment to tikkun olam,” the repair of the world.

He views the Hillel students who attended this GA as an indication of our potential Jewish leaders. “We must continue supporting this outstanding group of Hillel students,” he said. “The support the JCL gives to these kids will come back to benefit our community. They are so dedicated and committed. We have a bright future if we invest in these leaders.”

Jennifer Tuvlin also found the Hillel students inspiring, “with their dedication to Jewish issues. I hope my children are as passionate about Israel and social justice issues when they are that age.”

At the International Lion of Judah Conference, Abrams was particularly impressed by Repair the World, a Jewish organization that serves as a resource to connect people to Jewish services. “Their goal is to have all Jews, young and old, making service part of their lives,” she said.

Cheryl Karp, who attended only the ILOJ Conference, also spoke about Repair the World, noting that the Schusterman Foundation is one of the groups that funds this program, and that Julie Bergman Sender, Mona Brodsky’s daughter, works for the Schusterman Foundation. Through their hands-on projects, they demonstrate that there are many ways that people who want to do more than write a check can make a difference.

Karp said, the women who participated in the conference “are so dynamic and phenomenal” she is honored to be among them, and the conference programming “highlighted all the good work we do as a Jewish community.

Many of the sessions she attended focused on “how to leave you legacy. … Hearing the reasons people endow their gifts makes you feel good all over.” Attending the conference reenergized Karp. “I come back and say I know why this is important and why I do it. I see a younger generation that’s there and excited.” She heard lots of stories “of people who were not affiliated or committed who found a spark and have become leaders of their communities. It’s just a wow.”

“I want to thank the community for honoring me and allowing me to have such a great experience,” Karp said, and she is ready to begin recruiting for the next Lion Conference in two years.