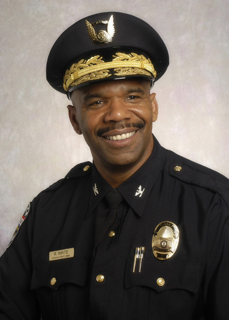 The Jewish Community of Louisville has announced that the 2010 Blanche B. Ottenheimer Award will go to Police Chief Robert C. White. The Ottenheimer Award recognizes individuals who have devoted their lives to tikkun olam – the repair of the world – and have made a real difference in Louisville.

“I am absolutely honored,” to receive the Ottenheimer Award, Chief White said. “I was reading about the efforts and accomplishments and tenacity Mrs. Ottenheimer had displayed throughout her life, she was almost like Gandhi. The things she worked so hard for are the things I value. My passion is for policing. It must be done the right way – to empower people, treating them with dignity and respect.

“I was raised that way,” he continued. “That is the key to having a police department that can be successful at what we get paid to do – prevent crime. She speaks to the diversity and richness of this community, and that is the essence of successful policing – using synergy to help create a safe community.”

Today, the Louisville Metro Police Department is the 22nd largest force in the country with 1,200 officers and a civilian staff of nearly 400.

In addition to successfully completing the merger, Chief White has brought a fresh approach to crime prevention to Louisville and has instituted a number of changes. He has established many community/police partnerships, decentralized his department, downsized specialty units and put more officers in the streets.

He’s also introduced several initiatives that foster public trust in and increase interaction with the department, such as the Latino and International Citizen’s Police Academies, the school resource officers program and the 574-LMPD crime tip hotline.
Recognizing that public trust and cooperation also depend upon thoroughly and openly investigating allegations of criminal misconduct by police and other public officials, Chief White also developed the Public Integrity Unity.

“Citizens expect the police and me to focus on the prevention of crime,” Chief White said. “Every day, we should get one day closer to making our community safer.” He sees prevention as the essence of a safer community and the key to prevention as “developing relationships in the community. I have learned from my experiences,” he explained, “that people are more willing to work with you if they know you, trust you and believe in you.”

To build that trust, Chief White has deployed as many officers as possible into all parts of the community, stressing to them that, “our real customers are the citizens. They are our ears and eyes.” And the citizens are more willing to work with the police, he explained, if they know the officer “is listening to them, responsive to their needs and treating them with dignity and respect.”
“I think we’ve gotten better connected with the community,” he said, when asked to identify his greatest accomplishment in Louisville. “Our department is very transparent and many more citizens are willing to work with us.”

The department tries hard to serve the community well, but, Chief White noted, “there are times when there are disagreements. With over 700,000 calls a year, controversial things happen.” That’s when the trust and goodwill the department has built pay off. While the disagreement may not be resolved, the relationship the department has developed is strong enough that the citizens understand the actions the officers take are in the best interest of the community. “With communication,” he said, “we can get beyond the disagreement … and the healing process is a lot quicker.”

Chief White also recognizes that minority faith communities in Louisville have specific concerns. “In light of everything going on in the world,” he said, “it is critically important that we listen to the concerns of various faith groups and try to understand from their perspectives where their concerns are, and where reasonable and practicable, to do what we can to address their concerns.”
While pointing out the Louisville is not a target like New York or Los Angeles, Chief White explained that the department does not dismiss the threats that may exist. He and other members of his department have touched base with the faith communities and have developed plans on the course of action to be taken should a credible threat arise. “We’re sensitized that they could be the target more than other parts of the community,” he said.

The LMPD has made significant strides in communicating and connecting with the community, and going forward, Chief White intends to continue that emphasis. “We need to be proactive,” he said, “to build relationships and to continue to push the importance of connecting with every resident who is remotely willing to connect with us.” To do this, he will continue to stress to his officers to treat everyone with dignity and respect.

Chief White began his law enforcement care more than 30 years ago as an officer with the Metropolitan Police Department in Washington, D.C. In his 23 years with that department, he worked in every bureau of the department and attained the rank of assistant chief before he retired to become the first Director of Public Safety for the District of Columbia Housing Authority. In 1997, he was asked to return to the MPD as assistant chief over all patrol operations; and in 1998 he became Chief of Police in Greensboro, NC.

His wife, Valerie, is a retired school counselor who worked in the District of Columbia public schools. The Whites have three children and two grandchildren. Their daughter, Cindy Moore, and her husband, Damion, and their children, Cecelia and Camille, live in Durham, NC, where she is a psychologist. Their son, Robert C. White III, lives in Louisville and is a manager at Humana. He will be married in August. Their son, Randall, is a teacher in Washington, DC, teaching “at the same middle school where I went to school,” the Chief noted.