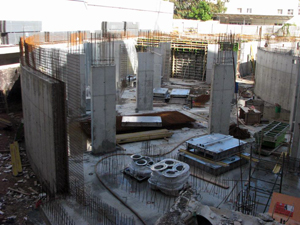 Since the program’s inception in 1997, the Jewish Community of Louisville and its predecessor organization, the Jewish Community Federation, have been active participants in the Jewish Agency for Israel’s (JAFI) Partnership with Israel program. The community belongs to the Central Area Consortium, a group of 16 Midwestern communities partnered with the Western Galilee.

Over the years, Partnership has provided opportunities for many Louisvillians to work one-on-one with residents of the Western Galilee on a variety of projects in which they have special interests.

A strong partnership has developed between the community and Western Galilee Hospital. A number of local physicians have participated in the hospital’s ERG (Emergency Response Group) training where they traveled to WGH and learned how to handle a mass casualty event in an intensive program not available in the U.S. There have also been numerous other exchange opportunities and visits by physicians both to Louisville and Nahariya.

On January 13 and 14, Judith Jochnowitz, the international liaison for Western Galilee Hospital stopped by Louisville on her way to the Partnership’s Central Area Consortium Steering Committee meetings in Dallas. While she was here, she stopped by Community’s office to provide an update on what’s happening at WGH. 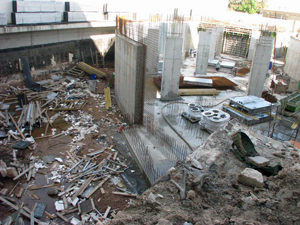 “Western Galilee Hospital is booming,” she said proudly. Construction on the Emergency Department that the Jewish Community of Louisville helped with its Israel Emergency Campaign (IEC) conducted during the 2006 Lebanon War is underway.

Nahariya is located very close to the Lebanese border and during the war it was the closest hospital to the front. That means that it served as the primary triage center for many war casualties, and it was in the direct line of fire. It sustained a direct hit to its Ophthalmology Department during the conflict.

While normal operations for the hospital are conducted in a traditional above the ground facility, WGH also has a complete reinforced underground facility that doubles as a bomb shelter and can even be sealed against chemical attack.

The new Emergency Department is also equipped with underground facilities. “We have now reached ground level” with the construction, Jochnowitz reported, “and are building above ground. The underground shell is done.” 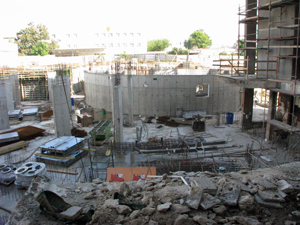 The new underground facility will have 80 new hospital beds and it is connected with the rest of the facility with tunnels. “With this building,” she explained, “there will be a way for people to disembark from ambulances in a sheltered area, so they are not exposed like they were during the last war.”

WGH is also expanding. “We now have 62 departments and specialty units,” Jochnowitz said, “including a new ICU Department that is protected so we don’t have to move intensive care patients underground if there is another war. We’ve increased the research we do and expanded the Genetics Department.”

The next major project the hospital is planning is a new Women’s Wing, “because the existing maternity facilities were built at the same time as the old Emergency Room and were totally unsafe. They couldn’t be used during the war.” This addition will mean another 114 underground hospital beds.

Jochnowitz thanked the Jewish Community of Louisville for all the help they have provided. While plans for the new Emergency Department had been started before the 2006 war, “it is because of the IEC and the Partnership and leveraging that money with the government that we were finally able to receive additional funds and begin construction,” she said. “For us, the Partnership is very meaningful and important.”

Jochnowitz is looking forward to the next ERG medical conference at WGH, planned for October 29-November 4. On November 13, she met with 25-30 prospective participants at the home of Dr. Philip Rosenbloom. Rosenbloom is chair of Consortium’s Medical Task Force. (Click here to see this story) 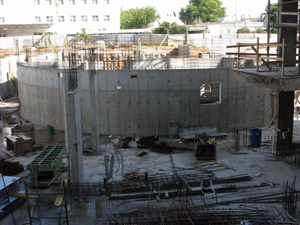 “There was a lot of interest in the next ERG course,” Jochnowitz said. “We hope to expand the course to have three tracks during the 40-hour course week. During those 40 hours, participants will spend 7-1/2 to 8 hours with colleagues in their own specialties.” While a number of specialties have been included in past ERG courses, this year WGH hopes to add a “track for the psychological effects of a mass casualty event.”

Every ERG course includes a mass casualty drill. During the last course, the drill dealt with an earthquake near or on the site of the hospital. “It seems very timely in light of what happened in Haiti where the hospital collapsed,” she observed. “This is another example of why we have to think ahead. We cannot plan for the last war, but we have to think about what might happen and be prepared for the other eventualities.

The ERG course runs about $3600, which includes virtually all costs. If you are interested in finding out more about taking part in the program, please contact Alan Engel at 451-8840 or alane@jcfl.com or contact Phil Rosenbloom at philrosey@aol.com.

Partnership with Israel receives support from the Jewish Community of Louisville’s Annual Campaign.

Central Area Consortium communities include Louisville and the Jewish communities in Akron, Austin, Canton, Dallas, Dayton, Des Moines, Fort Worth and Tarrant County, Indianapolis, Northwest Indiana, Omaha, San Antonio, South Bend, Toledo, Waco and Youngstown. The Jewish Federation of Northern New Jersey is also partnered with the city of Nahariya and the WGH is an active supporter of both partnerships.