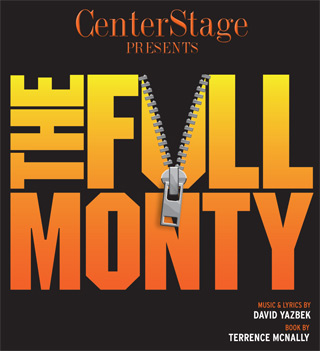 The Full Monty is so much fun that I cannot believe this production was my first time seeing it. I am well acquainted with the original film, upon which this lively musical is based; but this was my introduction to the tuneful and very funny score by David Yazbek. And while it may not be Cole Porter, it was a solidly crafted group of songs that met the most important criteria for musical theatre: I walked out humming the tunes.

Terrence McNally’s book is very faithful to the source, transplanting it from working-class South Yorkshire to working-class Buffalo, New York, without giving up too much. The film is obviously more gritty and naturalistic in depicting the economic hardships of a community devastated by unemployment, but the musical stays true to the themes and relationships, even if the natural gloss of the musical format grounds it slightly less in reality.

The script is lean and fast-moving, with a first act that is built for speed, carrying the necessary burden of scenario-building with aplomb and great humor. Very few scores that have emerged from Broadway in the last 20 years are truly memorable, and the music here is probably just slightly above average. But it rises above on several occasions and is distinguished more by the lyrics, which are often funny and do well in developing character and situation. Numbers like “Big-Ass Rock” and “Michael Jordan’s Ball” are effective showcases for the group of men at the center of the story, hilariously illustrating the developing camaraderie as they prepare to mount their striptease act for a one-night-only presentation.

CenterStage veteran Pete Lay leads a terrific cast that makes the most of the material and finds their individual moments to shine without upsetting the ensemble energy. Slightly unusual for a musical in that it is a show about men that pushes any conventional love story into the background, the women are given a little less to do but still manage to make their mark, particularly Julie Zilinski Gabis as Georgie and Kate E. Reedy as Vicki. The relationships with their husbands, Dave (director John Leffert having a good time) and Harold (Brent Gettlefinger), are given just enough poignancy to remind us of the desperation that prompts these hard hats to take on such a supercilious enterprise in the first place.

Life begins and ends with girlfriends [by Phyllis Shaikun] The National Council of Jewish Women, Louisville Section’s closing meeting and installation of officers at Rivue on Wednesday, May 16, was delightful. President Mindy Klein, who is beginning her second year …

[by Sara Klein Wagner] Senior Vice President and Chief Operations Officer We use the phrase “l’dor vador” or “from generation to generation” a lot in Jewish life. What will we pass on from this generation, from this moment in time? …

They are young and old, male and female; their interests are varied, from the next BBYO project to conversations with world leaders; but they all have one thing in common: They are all leaders who have helped make Louisville a …