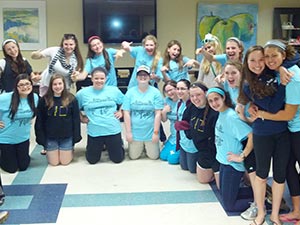 Jay Levine BBG
Although nearing the end of their term, Jay Levine BBG has been acting as energized and determined as they were at the very start.

Recently, the older members got paired with new MITs (members-in-training) in a big sister/little sister program in order for the younger members to be able to feel comfortable in the chapter and have access to all the information and help they need.

The MITs were “auctioned” off to eager members awaiting gifts ranging from handmade BBYO boxes, candy, and matching T-shirts.

The Toucans [a nickname for Jay Levine BBG] have also been busy raising money for their chapter to put towards new spirit wear, ISF, and scholarships funds. To celebrate the last day of LBSY Hebrew School, the girls hosted a bake sale that raised over $200. The chapter Gizborit, Katie Segal, also executed her biggest project of the term, the annual Mother’s Day Flower Sale. For months she organized costs of candy, flowers, and bagels, created a Mother/Daughter Spa Day offer, packaged the gifts, and planned routes for girls to deliver to.

The event was extremely successful and raised over $600.

To close out the term, the girls are preparing for their first-ever Chapter Convention: Out With the Old, In With the New. The event is at Hawthorne Suites from May 25-26, and will include creative programming, MIT inductions, and a senior “lives” ceremony. They are anxiously anticipating this long-awaited event that has been a put-forth idea for two years. The term has been a crazy one for Jay Levine, but has run smoothly and been filled with hard work, laughter, and lots of success.

Rachel Bass named BBG of the month
Rachel Bass (N’siah of Jay Levine BBG) was recently named KIO BBG of the Month for the Month of May. The following was written about her and her honor: Rachel Bass has been elected spring term chapter N’siah and with her help and the board Jay Levine has grown so much over this past term – number-wise and in strength. Along with the rest of the board, Rachel is a role model in her chapter and to everyone throughout the region.

Drew Corson AZA
During the last month, Drew Corson had its first ever AIT Board Elections. The AIT board is an opportunity for eighth graders to learn what it’s like to be in an AZA Chapter and to be responsible for planning a few programs during the term. The following AITs were elected: Ben Gould, godol; Alex Koby, s’gan; Spencer Geer, moreh; Jordan Gould, shaliach; Justin Bass, mazkir; and Drew Frey, gizbor.

Members also spent Oaks Day at the Hemmer’s house bonding as a chapter.

Middle school Dive-In movie overnight
Saturday to Sunday, May 18-19 was a crazy night for Teen Connection. Teen Connection welcomed the fifth graders to the program with an awesome night at the JCC.

The evening started with a Havdallah service and then everyone made their way to the pool! Teens splashed around in the pool for hours watching the hilarious movie, Parental Guidance. Once the movie was over, the teens enjoyed ice cream sundaes and some time getting to know each other.

With 26 middle schoolers in attendance, this night was a blast! Thank you to everyone who attended. Can’t wait to see everyone at the next Teen Connection program in August.

THE JEWISH COMMUNITY OF LOUISVILLE INVITES YOU to join the celebration of volunteers, community service and achievement at its 2013 Annual Meeting, Monday, June 3, at 7 p.m. at the Jewish Community Center. The highlight of the evening will be …