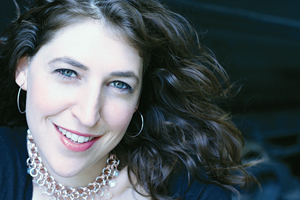 Mayim Bialik an accomplished, well-known actress. She’s also a scientist, a vegan and a mother who home schools. To top that off, she’s Jewish.

All women in the community are invited to meet Bialik and hear the inspirational story of her life when The Jewish Community of Louisville’s 2011 Annual Campaign Women’s Philanthropy Division bring her to Louisville for Big Bang Wednesday on May 11. The event will be at 6:45 p.m. at the Water Tower. The cost is $25 per person.

“We’re putting this event on as a thank you to the women of our community for their support of the Jewish Community of Louisville and its Annual Campaign,” said Joy Kaplan, who is co-chairing the event with Linda Schuster. “It will be a fun night out to be with old friends and meet new one. Plus we’ll get to hear and meet this fabulous, modern Orthodox Jewish woman with very down-to-earth values.”

“She’s got a lot of very interesting things to say,” Kaplan continued, “and her appeal seems to span generations. Young people in their 20’s know her for ‘The Big Bang Theory,’ and those of a different generation know her through ‘Blossom.’ This will be a great event.”

Bialik’s acting resume also includes the role of the young Bette Midler in “Beaches” and guest roles on some of television’s most beloved shows of the 1980’s and 1990’s, such as “MacGuyver,” “Webster,” “Facts of Life” and “Murphy Brown.” In addition, she appeared in Woody Allen’s “Don’t Drink the Water” in 1994, HBO’s “Fat Actress”, and the HBO comedy series “Curb Your Enthusiasm.”


Bialik attended UCLA, where she earned a B.S. in neuroscience and Hebrew and Jewish studies, and a Ph.D. in neuroscience. For her doctorate, she examined Obsessive-Compulsive Disorder in adolescents with Prader-Willi syndrome.

Bialik is a board member and co-founder and chair of Jewish Free Loan Association’s Genesis branch, and is an avid student of all things Jewish. She is devoted to a lifestyle of attachment parenting, home-schooling, natural family living and vegan cooking.

She continues her Jewish studies weekly independently and through Partners in Torah, keeps a traditional Jewish home and cares for her two boys with her husband.

This will be a thank-you event for the women of the community, and will offer those who have not yet had the opportunity to make their commitments to the JCL’s 2011 Campaign to do so.