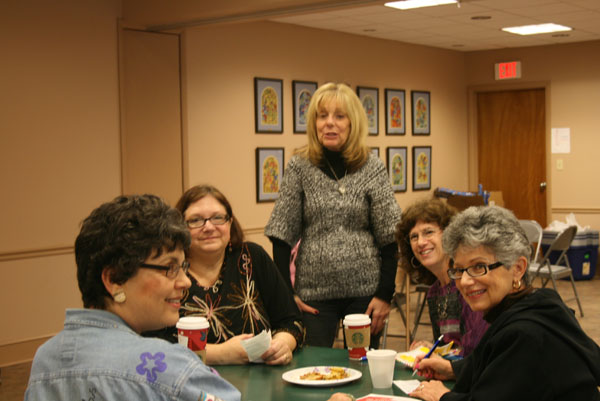 The Louisville Section of National Council of Jewish Women (NCJW) hosted its second annual Mah-Jongg Mania FUNdraiser on Sunday, December 2, at Temple Shalom. Sixty-nine dedicated players came, undeterred by the rain that seems to coincide with the event.

It was an afternoon of fun, laughter, good food, and some friendly competition among friends. Many were lucky enough to win one of the 25 door prizes given out during the day. Prizes included a gift basket of beauty products, lucite Mahj pushers, earrings, and a Mah-Jongg designed umbrella.

Players of all skill levels were present. Many had attended the free Mah-Jongg classes taught by the NCJW members at the JCC Cafe in September, October, and November.

Attendees were asked to bring canned goods and non-perishables, which were donated to the Sonny and Janet Meyer Food Pantry at Jewish Family and Career Services. Proceeds from the event are used to fund the Louisville section’s projects that enable the chapter to give back to the Louisville community.

Chanukah is one of the most visible Jewish holidays in the general community, but many of our neighbors know very little about it. To increase understanding of our holiday traditions, the Jewish Community Relations Council invited people from congregations across …

The Middle East has many flash points. There is civil war in Syria that has sent waves of refugees and sometimes violence into Turkey and Jordan and has even reached into Lebanon. Egypt is in turmoil over the power grab …

If you came into the lobby of the Jewish Community Center on Saturday, December 1, no one would have blamed you if you thought you were approaching a grand ballroom. The elegant black and white drapes and tablecloths transformed the …