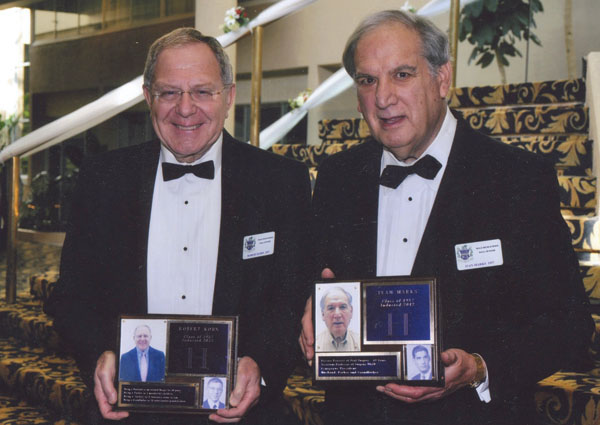 When Male High School inducted new members into its Hall of Fame on September 30, Robert A. Kohn and Ivan Marks, both members of the class of 1957, were among the honorees. Both were recognized for their service to both the Jewish and general communities.

After graduating from Male, Kohn earned his B.A. in political science from the University of Louisville and his J.D. from the Brandeis School of Law. He also did graduate studies in tax law at New York University.

An attorney-at-law, Kohn has been admitted to practice in Kentucky, at the Kentucky Supreme Court, the U.S. District Courts for Eastern and Western Districts, the U.S. Court of Appeals 6th Circuit, the U.S. Supreme Court and the U.S. Tax Court. He is a fellow of the American College of Trust and Estates Counsel, past chair of the Louisville Bar Association Taxation Committee and is a lifetime member of the University of Louisville Board of Overseers.

Kohn and his wife, Margie, have four children and three sons-in-law, Joan and Craig Lustig, Gary and Lois Claar, David Kohn, and Denise Kohn and Adam Blank; and 10 grandchildren.

Marks earned his DMD from the University of Louisville and a certificate in Oral and Maxillofacial Surgery from Bronx Municipal Hospital Center.

You can raise money for charity by joining a stationary bike challenge Dec. 9 at Jewish Community Center of Louisville, 3600 Dutchmans Lane. Riders will pedal for one to five hours as part of Cycle for Good, a fundraiser that …