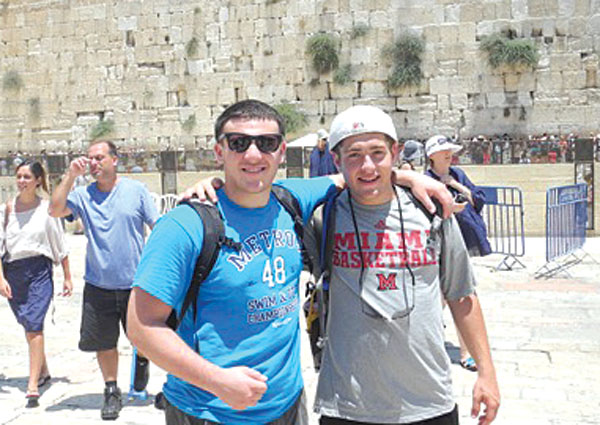 The Kentucky Day School junior made the journey as the recipient of the 2012 Ellen and Milton Cantor Israel Scholarship, an honor he received in recognition of his involvement and leadership in Louisville BBYO (B’nai B’rith Youth Organization) and his participation in national and international BBYO events. But Jacob says this trip was “eye-opening,” making him aware of his cultural and religious roots in ways and to a level that went well beyond his expectations.

Jacob traveled to Israel on BBYO’s premier leadership trip, International Leadership Seminar Israel (ILSI), based in Hod Hasharon on the Alexander Muss School campus. From Hod Hasharon, the group branched out to Jerusalem, Masada, and took several day trips, including a visit to the Israel-Lebanon border.

Jacob had friends from previous trips who also went, and he looked forward to making new friends. Additionally, he was excited about the trip because it he was the last in his family to go to Israel.

The sights were amazing, he reported – the Western Wall in Jerusalem, the water tunnels that carried water into the city thousands of years ago, the desert border – and the photo opportunities were endless. Jacob is a photographer with his own small business, Duetto Designs, and he added significantly to his portfolio.
But it was the stories he heard that expanded his vision.

Visiting the Western Wall, he says, was a powerful experience. Being there on Shabbat, being a part of the crowd and praying together, seeing the broad cross-section of worshippers and realizing they were all there for the same purpose gave him a deeper understanding of his religion and a wider vision of the Jewish community. “I grew up Reform,” Jacob said. “We go to The Temple. But there were people there from everywhere.” He told about meeting a dentist from New York City who flies to Jerusalem every Friday to be there for Shabbat. That level of commitment still staggers him when he thinks about it.

A walking tour of the water tunnels in the Old City, built almost 3,000 years ago during the reign of Hezekiah, was fascinating. The tunnels were constructed to divert precious water into the city when it was threatened with attack from Assyrian troops. Two teams of men chiselled through solid rock to dig the tunnels, one team working from the outer perimeter of the city and the other from the reservoir in the city’s center; they met in the middle, finding each other by following the sounds of each other’s chiselling.

Water still runs through these tunnels, sometimes as deep as 28 inches, making tours a damp business with water shoes and flashlights required. Literally wading through history can be a humbling experience. It certainly brings home the stressful reality of everyday life even in 700 B.C.E., and the engineering is a testament to the creative intelligence of the people of that time and place.

But most moving, according to Jacob, was the time he spent with family members – Holocaust survivors who live in Israel. He said, “It was amazing meeting them! They were the nicest people ever and I love hearing their stories … also very eye-opening.”

Back home, Jacob is busy with school, his photography, and narrowing down his college choices. He wants to study business entrepreneurship, minoring in sports management and perhaps photography.

Asked whether he wants to go back to Israel, he laughed and said, “Definitely – to visit! After a while, you start to really miss things like air conditioning on the second floor in the middle of summer.” But he enthusiastically recommends that other young people make the trip. It’s a way to get acquainted with your history and your religion on a very tangible, personal level.

“I would like to thank the Cantor family for giving me this opportunity to experience Israel,” said Spielberg, “so that I can learn and grow as a Jewish teen leader.”

Tax laws can be confusing, particularly when it comes to providing for your family’s future and meeting your philanthropic goals after you are gone. A little bit of planning now can ease the burden on your family and give you …

JERUSALEM, November 12, 2012 (JTA) — Representatives of Palestinian terrorist groups agreed conditionally to a cease-fire with Israel that included a stipulation that they had the right to respond to Israeli aggression. At a meeting Monday evening in the Gaza …

When communism fell in the Soviet Union and the Iron Curtain, so long padlocked shut, swung open, our Louisville Jewish community joined Jews around the world in celebrating. Many of us had struggled for years, begging the Soviet leaders to …