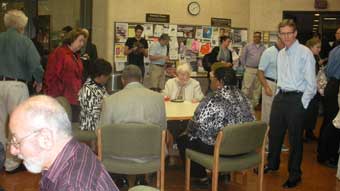 The U.S. Holocaust Museum’s traveling exhibit, “Nazi Persecution of Homos-exuals, 1933-1945,” is on display at the University of Louisville in the Ekstrom Library now through November 28.

The exhibit examines the plight of people who identified as lesbian, gay, bisexual, or transgender (LGBT) during Hitler’s regime in Nazi Germany.  Often overlooked in stories of the Holocaust, LGBT people were targeted and arrested along with other identity groups.

The exhibit provides a starting place for conversations, classroom lessons and social justice efforts that focus on ending oppression and offers a new way to understand Martin Luther King’s belief that “Injustice anywhere is a threat to justice everywhere.”

It is well known that between 1933 and 1945, Nazi Germany sought domination over Europe and, in what is now called the Holocaust, the total annihilation of Europe’s Jews. 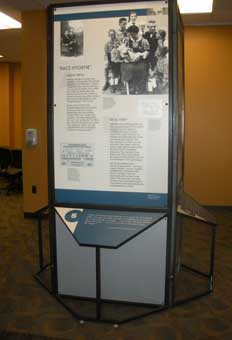 The Jews, however, were not the only people singled out as undesireables. As part of its effort to create a “master Aryan race,” the Nazi government also persecuted other groups, including Germany’s homosexual men. Believing them to be carriers of a “degeneracy” that threatened the nation’s “disciplined masculinity” and hindered population growth, the Nazi state incarcerated in prisons and concentration camps tens of thousands of men as a means of terrorizing German homosexuals into social conformity.

Through reproductions of some 250 historic photographs and documents, “Nazi Persecution of Homosexuals 1933–1945” examines the rationale, means, and impact of the Nazi regime’s attempt to eradicate homosexuality that left thousands dead and shattered the lives of many more.

This display is sponsored by the Annette and Joseph Gale Fund, the Jewish Community of Louisville, Jewish Hospital HealthCare Services, the Commission on Diversity and Racial Equality, the Student Government Association and the Office for LGBT Services and University Libraries. More information can be found at http://louisville.edu/lgbt.