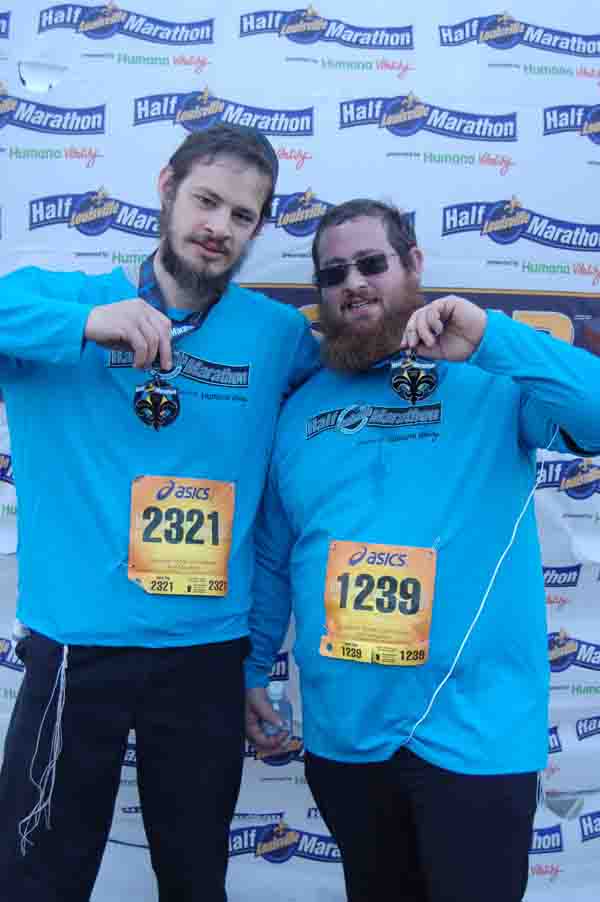 From November 1-3, I represented Louisville at the International Annual Convention of Chabad Lubavitch Emissaries held in Brooklyn, NY. There were over 4,000 Chabad Rabbis present from more than 80 countries and most every state across America.

All in all, the convention was three days packed with workshops, seminars and inspiration from communities large and small around the world. For me, the highlight was the grand banquet attended by an additional 900 lay-leaders, bringing the total number in attendance to over 5200 people.  (In fact, it is the largest kosher sit down dinner anywhere in the world).
The lay leader address was given by former Senator Joseph Lieberman who shared his many personal encounters with the Rebbe over his tenure in politics. The keynote address was given by Rabbi Dov Greenberg, who is the Chabad Rabbi at Stanford University. I would like to share a story he told because the lesson is so relevant and encouraging.

Rabbi Greenberg told a story of a fellow named Stanley who was asked to put on tefillin (phylacteries) by a Chabad Rabbi, but refused. A week later, the same Rabbi asked again if he would reconsider putting on tefillin and again he refused.

Stanley explained to the Chabad Rabbi that his own father had been religious as a boy growing up in Russia but gave it up when he immigrated to America. In fact, Stanley said, my father threw his tefillin overboard on the boat to America and watched his connection to traditional Judaism sink along with his tefillin. “Our family is no longer interested in mitzvahs,” he said.

Yet the rabbi was persistent and finally, Stanley acquiesced and put on the tefillin. Some time later, when asked to put on tefillin again, Stanley asked why and began to study about tefillin with the Rabbi. He shared some of that newly found knowledge and explanations with his girlfriend Sherri, who also found it interesting and appealing.

At this point, Rabbi Greenberg told the assembled that he and his three siblings are all Chabad shluchim and work on various college campuses around the country. Together, on the Friday night prior to the convention, they each arranged Shabbos prayers and dinner and collectively hosted 392 college students.

Then he shared what I found one of the greatest highlights of the entire weekend. That he, his brothers and sisters were only Chabad because his parents, Stanley and Sherri, were encouraged to do a single mitzvah 35 years ago.

All of those students, 392 students, on a single day were encouraged to do a mitzvah, as an outcome of that one Chabad shliach going back over and over to just encourage Stanley to put on tefillin one time.

A whole life, a whole family, hundreds of students on a single Friday night and hundreds of other people multiplied by thousands of other days and nights – all because one Rabbi asked one man named Stanley to do one mitzvah and put on Tefillin. One little mitzvah can really change the world
A recent Pew survey had some discouraging information on the “decline of Judaism.” I believe that if we each do one additional mitzvah outside of anything we do on a regular basis we can change those statistics dramatically.

There are chances to do mitzvahs all the time, attend a service, help a friend, put a smile on someone’s face. Let’s step out of our comfort zone and impact the world around us.

Over the next few weeks, Chabad of Kentucky will be sponsoring Chanukah parties, on November 27 at 4th Street Live from 4-5:30 p.m.; on December 1 at Alpine Ice Arena at 7 p.m.; on December 3 at Joseph Beth Bookstore in Lexington at 7 p.m. and on December 4 at the Paddock Shops (formerly the Summit) at 6 p.m. I encourage you to attend one of these programs or some other Chanukah celebration.

In my own life, I stepped out of my comfort zone and ran a half marathon to raise money for Friendship Circle – an organization that helps children with special needs. When I finished the marathon, I received a medal. But greater than any medal, was the knowledge that I added a new mitzvah into the world and I now see how even a single mitzvah helps to make a real difference in the world.

If each person reading this article would add some mitzvah into their lives, the whole world would be brighter. Consider lighting a Chanukah menorah or a Shabbos candle or consider some other mitzvah of your choosing. (Chabad of Kentucky will provide a gift of a Chanukah menorah or a Shabbos Candle lighting kit to anyone who would not otherwise be able to light candles.)

The main inspiration I received at the convention was the real life story of a single mitzvah really changing the world. It made me think differently about doing even the smallest of good deeds.  I hope it did the same for you.

Editor’s note: Rabbi Chaim Litvin, a local emissary of the Lubavitcher Rebbe, has volunteered to provide Torah commentaries for Community.

[by Niki King, Public Relations Specialist] Ever wonder what Louisville’s Jewish community can be for you? Or what you can be for the community? Here’s your chance. LEADS (Leadership Education and Development Series) is a free, three-session program that offers …

[By Ben Goldenberg] Three members of the JCC Gators traveled to Nashville to compete in a swim meet with Nashville on November 3. Eli Partin won the Boys 13 & over 100 meter IM with a time of 1:59.35. He …

NEW YORK- Annual Israel bond investments in the U.S. domestic market exceeded $1 billion for the first time, as 2013 sales broke through the historic threshold in early November and continue to surge. With six weeks still remaining in the …