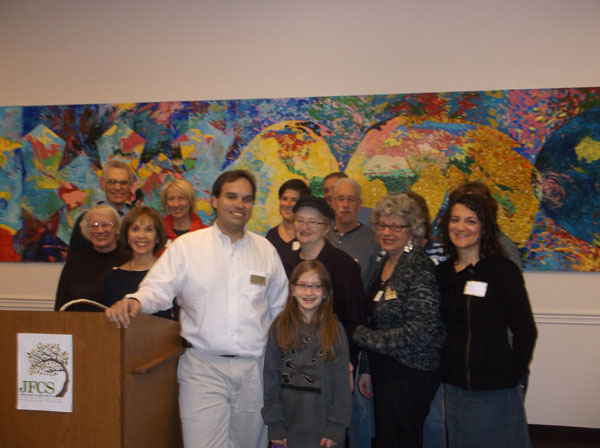 If your total food budget for the week were just $31.50 per person, the amount the average Food Stamp recipient receives, how would you fare?

The answer for the more than 20 people who joined the Jewish Community Relations Council (JCRC) and Jewish Family & Career Services (JFCS) in taking the Food Stamp Challenge, varied with their circumstances. While all agreed that it was not easy to get by and eat healthily on such meager resources, individuals had more difficulty stretching their dollars than families who pooled their funds; and some of those with special dietary needs found they couldn’t make it through the week, running out of food as early as Thursday.

More than 50 people who are concerned about the issues of hunger and poverty came together on Sunday, January 27, at JFCS for a potluck dinner that marked the end of the week for those who took the Food Stamp Challenge.

In introducing the guest speaker, Robin Rosenbaum, the director of The Jewish Council for Public Affairs’ (JCPA) Poverty Action Campaign, JCRC Director Matt Goldberg said the Food Stamp Challenge was a natural fit and logical next step for Louisville’s Jewish community. The community already actively supports JFCS’s Food Pantry and the annual Community Hunger Walk, and this year, for Purim, the JCRC is raising money for Blessings in a Backpack. (See inserted card.)

The purpose of the challenge is to raise awareness of SNAP (Supplemental Nutrition Assistance Program known as Food Stamps), which is always under threat for cuts during the Federal budget process. With the current $31.50 per person allowance, Goldberg said, every decision about which food items an individual purchases becomes a financial decision rather than a choice of what a family would like to eat or which foods would be the healthiest.

After providing an overview of JCPA, Rosenbaum said the Food Stamp Challenge is one of a number of programs that puts Jewish values into action – in this case, the mitzvah to take care of the poor. In addition to hunger, JCPA is working to fight poverty and to ensure greater availability of affordable housing.

The Food Stamp Challenge, she explained, was started four years ago with just a few communities. In 2011, JCPA transformed it into a large national program that included several members of Congress. It is just one of the tools the organization uses to fight poverty.

JCPA is also working on a “faith mobilization,” building coalitions with the National Conference of Churches, Catholic Charities and others to focus on poverty issues.

With Passover quickly approaching, JCPA is partnering with MAZON, the Jewish response to hunger, in promoting awareness of the issue with the Hunger Seder, which uses a special Haggadah to focus attention on hunger.

One in six families and one in 24 children in Kentucky struggle with hunger Rosenbaum pointed out.

SNAP is part of the Farm Bill, she explained, and last year, Congress proposed $15 million in cuts to the Farm Bill. JCPA and JCRCs across the country will be lobbying to maintain or increase funding for SNAP. Since Food Stamps today are distributed through a card, like a credit card, that only allows the purchase of food, it is one of the most effective and least abused Federal programs today, she said.

JFCS Executive Director Judy Freundlich Tiell elaborated, explaining that people who use the program and the JFCS Food Pantry are often people who used to be able to support themselves, but have suffered illness or are out of work. Their children are in the free lunch program at school.

There are people in Louisville in need of food, she continued. There is still a stigma attached to asking for help, but this is an issue of tikkun olam, the repair of the world. The person in need, she said, “may be the person sitting next to you in shul.”

A number of those who took the Food Stamp Challenge shared a few observations from their experiences.

Matt Goldberg thanked his wife, Lisa, for clipping valuable coupons and checking out specials which helped him better shop for his challenge week. He said his food became “boring” and was likely much less nutritious than it should have been.

Jessica Goldstein, a stay-at-home mom who is a vegetarian and avid runner, admitted to being hungry almost the whole time despite careful planning to stay within the prescribed budget for a week. If she had been allotted even one more dollar per day, she said, the challenge would not have been quite as challenging.

Joan Simunic and her whole family had good results during their week, having the wherewithal and organizational skills to plan when to shop at Kroger as soon as items were marked down for quick sale to stretch their combined dollars further. She noted that Kroger marks down produce at 9 a.m. and meat at 1:30 p.m. each day. But how many families, particularly among the working poor, can manage to be at Kroger at the right times or to make multiple trips to the store?

Many were humbled by the fact that one dinner or lunch outing could “ruin” their chances of staying within the meager budget. Since awareness was the real goal, the group admitted that they would not have the freedom and privilege to eat out very often without the resources they are fortunate enough to enjoy.

Paint a Masterpiece On Sunday, February 10, nine Jewish children in 3rd-5th grade went to Uptown Art in the Highlands to paint a painting with Jewish stars. They learned about color mixing, techniques to paint on canvas and how to …