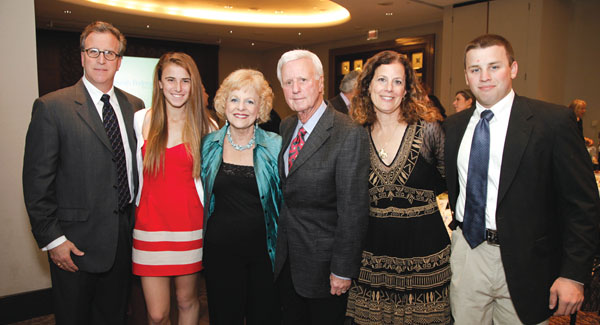 At the Jewish Federation of Louisville’s Major Gifts Dinner on Saturday evening, November 17, one message came through loud and clear: with the dollars that we raise through the Annual Federation Campaign, we do extraordinary things that make a real difference for people in our own community, in Israel and around the world.

The strength of our Louisville Jewish community, the cooperation among agencies, the community’s commitment to Israel and to Jews around the world were evident throughout the event, from the opening moments to the time when those in attendance made their commitments to the 2013 Federation Campaign.

Many of those in attendance were moved to increase their gifts to the Campaign by 20 percent or more. One individual even doubled his gift. Overall, donors that evening pledged 11 percent more than they did last year.

In addition, Jewish Heritage Fund for Excellence Board Chair Louis Waterman explained the mission of this new organization, which incorporates the JHHS Louisville Jewish Community Excellence Grants and other funds, and expressed JHFE’s commitment to the Jewish community; and University of Louisville student Gariy Ocheretner thanked the group for the many opportunities the Jewish community has provided him both as an immigrant from the former Soviet Union and through Hillel.

In Israel
As the dinner took place during the latest military confrontation between Gaza and Israel, some attention was focused on that critical situation. Young Adult Division Chair Ariel Kronenberg, who grew up in the Jewish State and has family there today, recalled that he was in Israel during the Gulf War. “I remember hearing the sirens and bombs and not knowing if we would live another day,” he said.

Today, his parents and niece, living as far away as Rishon L’tzion and Tel Aviv, heard the sirens sound, but they are safe. His brother is an IDF officer and his nephew is one of the operators of the Iron Dome system that intercepted many of the rockets Hamas fired at Israel’s population centers.

When the sirens sound, everyone has just 15 seconds to get to safety – everyone from the most gifted athlete to the newborn baby to the frail senior using a walker. In total, more than 1.5 million Israelis were under threat of rocket attack.

Karen Abrams, chair of the 2013 Federation Campaign, made the connection between the Louisville Jewish community and Israel. “Our partner agencies, partially funded through our overseas allocation to Jewish Federations of North America, the Jewish Agency for Israel (JAFI) and the Joint Distribution Committee (JDC), are literally on the ground as we speak providing direct relief.

“Our partner agencies are providing services include trauma counseling, financial assistance, portable bomb shelters, and potentially other initiatives including bringing children in the strike zones out of harm’s way,” she added. “This is why we are here tonight. This is part of the critical work we do in Israel, Louisville and around the world. This why we need your help and support.”

To assist JAFI and JDC with their emergency work, the Jewish Community of Louisville announced at the Major Gifts Dinner that it accelerated the payment of its allocation to JFNA, paying the entire amount now rather than keeping to the original schedule of monthly payments through June.

Around the World – Alina’s Story
The extraordinary things we do that make a difference for Jews around the world came into sharp focus when the keynote speaker, Alina Gerlovin Spaulding, shared her remarkable story.

Alina grew up in the former Soviet Union, and in 1973, things looked very good for her and her family. Her father had the potential to be an Olympic skier, so even though the family was Jewish, they were doing well. They had a comfortable apartment, food, clothing and the future looked bright.

In February 1974, her father had a bad accident on the slopes, breaking his leg, and before he was even brought down from the mountain, the family was evicted from their apartment.

Although her father needed immediate surgery, he wasn’t seen by a doctor for eight days, and then her mother had to raise the money for the supplies needed for the procedure. It was October before she was able to get the money, and in the meantime, infection had set in and Alina’s father had developed hepatitis. He was told that he would not survive five more years.

Family life had taken a turn for the worse, too. “We lived like all other Jews,” Alina said – six people – four generations – lived in one small apartment.

In 1978, the JDC (American Jewish Joint Distribution Committee) found them and in 1979, rescued them, sending them first to Austria for a month, then to Italy for six months, and finally to New Jersey, where they settled. The family was fully supported through the entire time. “You and people like you helped us,” Alina continued.

When they got off the plane, Alina’s father was so ill, they did not expect him to survive the year. The only things they had were $400 and two suitcases. A volunteer holding a sign with their family name, written in Russian, met them at the airport. That scared them at first because they thought she might be from the KGB.

She took them to an apartment building in Passaic, NJ, where so many Russian immigrants were housed that it was known as “The Kremlin.” There, they found a furnished and fully stocked apartment waiting for them. It was so big, Alina’s family wondered if it was intended for more than one family, and it was stocked with so many things – clothes, toys, food, furniture, linens – all provided by the Jewish community – that they had trouble understanding that it was all for them.

“You’ll get jobs,” Kitty babbled on, “but we’ll help you as long as you need it.”

Alina, who was now five years old, was enrolled in school and her father got medical care in Passaic, but his health was so poor that he was not expected to make it to his 30th birthday, less than two years away.

Someone heard about his condition and made an anonymous gift that enabled him to travel to a specialist on the west coast, and in 1980, he underwent lifesaving surgery.

“Everything I have and what I have accomplished,” she told those in attendance at the dinner, “is due to you.”

Giving Back
As an adult, Alina went on to become the director of a pluralistic, boarding Jewish High School in Greensboro, NC, where she recruited students for the program. The Federation director there asked her to travel to Moldova during the summer to run a camp and help build the Jewish community there.

Although she had been born in the FSU, Alina did not know anything about Moldova, not even where it was. She learned that prior to World War II, Moldova had a Jewish community of 60,000. Today, that community numbers 2500.

At her first meal in Moldova, after 23 hours of travel, she met Oleg who, upon ascertaining that she recruited talented students for a Jewish school in the U.S., asked her to take his talented daughter back to Greensboro and enroll her in that school. After meeting Anya, discovering that she was an exceptionally gifted student – she spoke five languages, was good in math and science, ran track and played basketball – Alina called her husband, and he said, “what the Jewish community did for you, we will do for her.”

Alina and her husband took both Anya and her sister, Sasha, into their home in Greensboro and gave them opportunities they would not have had if they had stayed in Moldova.

Today, Alina is head of the Akiva Day School in Nashville and she continues to work for the worldwide Jewish community.
“Everything I have and everything my kids have,” Alina concluded, “is because of people like you. I lead an extraordinary life, so I make an extraordinary gift. Because of your gift, you will change someone’s life.”

To make your gift to the 2013 Federation Campaign, contact Stew Bromberg, 238-2755 or sbromberg@jewishlouisville.org, or pledge online by clicking here.

Thursday, December 6 is the 25th anniversary of the Freedom Sunday March in 1987, the largest-ever gathering of Americans rallying for the freedom of people in another nation. The Mobilization for Soviet Jewry brought 250,000 people to the National Mall …