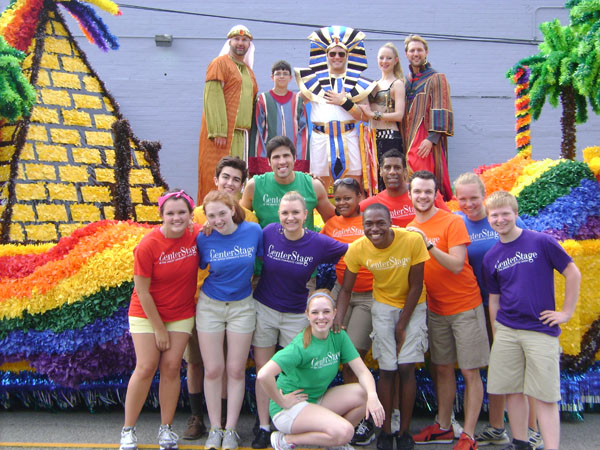 CenterStage’s annual float in the Pegasus Parade was a huge success again this year. CenterStage was awarded the KDF President’s Award, the award for third place. This is at least the third year in a row CenterStage received an award.

This year’s theme was “Rainbow of Fun” with actors on the float appearing as cast members in the upcoming performance of Joseph and the Amazing Technicolor Dreamcoat. More actors were dancing on foot around the float.

During the Pegasus Parade Preview Party on Tuesday, May 3, cast members from CenterStage ActingOut’s Alexander and the Terrible, Horrible, No Good, Very Bad Day performed several times to the delight of the school children there to check out the floats.

Special thanks goes out to everyone who helped with the design and construction of the beautiful float.

Without an amazing cast of volunteers, CenterStage would not be able to perform the quailty of productions it is known for throughout the region.

They are young and old, male and female; their interests are varied, from the next BBYO project to conversations with world leaders; but they all have one thing in common: They are all leaders who have helped make Louisville a …

[by Shiela Steinman Wallace] From the moment people walked in the door for this year’s Jewish Family & Career Services MOSAIC Awards, it was obvious that something was different this year. In the past, people made a beeline for the …