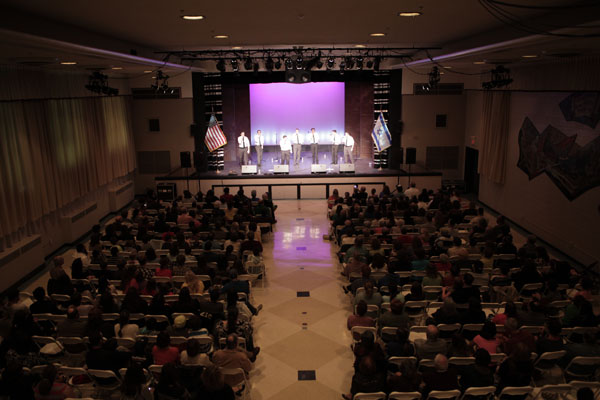 With a sold-out house, the JCC’s Linker Auditorium was packed on Sunday, April 22, when the Maccabeats took the stage, and when the seven young men filled the room with their amazing sound, not a single person was sitting still.

This a cappella group from Yeshiva University rocked the hall. With tight harmonies, that plumbed the bass depths of the human voice in places and soared clearly to the envy of many a soprano in others, the Maccabeats presented a series of pieces that were clearly Jewish in content, and designed to appeal to the young and the young at heart.

One of their members, Meyer Shapiro, provided such a wide variety of vocal percussion you’d think the group had a drum set hidden somewhere. He was by no means the sole source of faux instrumentation, but he certainly predominated, sometimes even moving back and forth from traditional vocals to percussion.

The group started their set with a Chanukah song, Al HaNisim, setting the bar high for the entire show; then they moved into L’cha Dodi, presented as a lyrical waltz with a 1950’s doo-wop feel. Shapiro managed to produce a sound that resembled wire brushes gently stroking a cymbal to accompany his companions.

The Maccabeats were friendly and regularly invited the audience to participate – even encouraging them to repeat “boots and cats” several times in a demonstration of vocal percussion techniques.

While most of their material was Jewish and included songs from holidays, they also performed Journey’s “Don’t Stop Believing” and demonstrated their enjoyment of playing with music by performing the chorus of Solomon Linda’s “The Lion Sleeps Tonight” first in a minor key, then as it was written.

As the Maccabeats travel around the country, they partner with Gift of Life to incorporate a bit of tikkun olam in their shows. Gift of Life sets up a table at every show to give people the opportunity to become bone marrow donors.

Individuals who pass a very general screening and are interested in being donors provide Gift of Life with genetic samples by swabbing their mouths with a cotton swab. These samples are then processed to establish a database that matches those in need of a bone marrow transplant with potential donors. The organization was also accepting donations to help with the expense of processing the biological samples. Louisvillians kept the Gift of Life table busy, and 25 people signed up for the registry.

Louisville teens who are participating in the Maccabi sports program were also busy raising money for their program by selling raffle tickets for an iPad.

Following the concert, kosher Israeli dinners were available for purchase, and the teams who completed the Team Trek to Israel picked up their T-shirts and certificates.

The program co-chairs, Amy Ryan and Julie Ellis, briefly welcomed everyone and introduced the Maccabeats. They also recognized JCC Program Director Andrea Melendez, who did a lot of the organizing for the day’s events, and presented her with roses as she has now moved on to a new opportunity with a different employer.

[by Deb Aubespin and Shiela Steinman Wallace] Marie and Ron Abrams will be honored at The Temple’s 7th Annual Tribute Dinner on Sunday, June 3, at 6 p.m. at The Temple. The Abrams have been long-time civic volunteers whose commitment …

Down on their luck and short of cash, six unemployed steelworkers from Buffalo, NY decide to bare it all in CenterStage’s next production. Under the artistic direction of John R. Leffert and written by the Tony Award winning team of …