When more than 70 members of the Jewish Community of Louisville’s Women’s Division gathered at the Olmsted on Thursday, March 29, for A Women’s Evening Out, they were treated to a lively and engaging presentation by “The Adventure Rabbi,” Jamie Korngold. 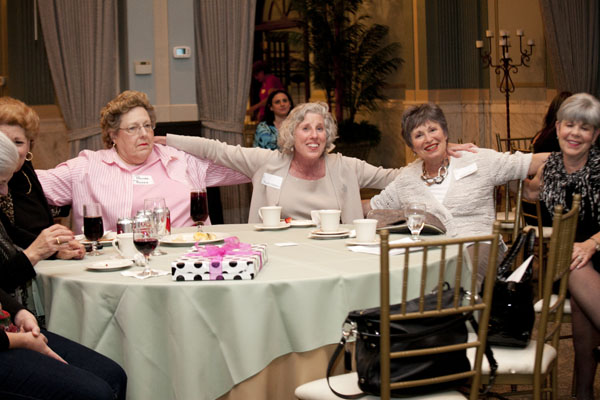 Rabbi Korngold pointed out that women have come a long way as Jewish leaders. In the 1960’s, when her aunt chose to pursue a career in the Jewish world, she could be a Hebrew teacher or make aliyah. She chose the latter.

When Korngold made the same decision in the 1990’s she was able to choose to become a rabbi. Following ordination, she found that Jewish women still have a way to go to achieve acceptance. When she was offered a pulpit in Calgary, Alberta, Canada, she was offered $10,000 less than her male colleagues. She chose to take the position anyway.

Once there, she encountered additional challenges. As she provided innovative programs that drew crowds, behind her back, she was criticized for things like her decision not to wear makeup and to drive a red pickup, which they deemed inappropriate for funerals.

When asked to do a conversion and baby naming in the Grand Canyon, with 12 students from Williams College, she combined ritual and nature for a unique experience that was meaningful for all and changed her life.

She resigned her pulpit, drove to Boulder, CO, and began the Adventure Rabbi program.

She began exploring the frontiers of religion, doing things like climbing mountains with b’nai mitzvah candidates and making what she called a “God upgrade.”

Today, her congregation is very fluid. They meet in a variety of locations, often outdoors. Rather than paying dues, they pay for each event they participate in and each service they attend.

Rabbi Korngold and her partner, Rabbi Evon Yakar, teach via Skype and lead a wide variety of events.

Rabbi Korngold said the wilderness “feeds our souls” and “creates spiritual portals” that are cleansing and enable us to relax and draw inspiration while giving us perspective – helping us “realize our smallness.” Tapping into this spirit, she creates programs that are accessible, relevant and meaningful.

For example, at Passover, she told the women, she takes 260 Jews on a three-mile hike into the desert. Strangers and friends help each other and get to know each other. They explore “what enslaves each of us and what sets us free,” she said. The experience is “an affirmation of our communal commitment to work for freedom for all.

Picking up on Rabbi Korngold’s efforts to make Judaism relevant for her constituents, Women’s Philanthropy Chair Kate Latts noted that Louisville has fewer than 10,000 Jews where Boulder has over 100,000; but the JCL offers many options to help make Judaism relevant. Those resources are available “as a result of our efforts and our gifts,” she said.

Over the past five years, women have raised $3 million for the Federation Campaign, she pointed out and she asked those present who had not yet made their gifts to do so that evening.

A group of visiting Israeli kindergarten teachers from Louisville’s Partnership 2Gether Region, the Western Galilee, joined Louisvillians for this program.

Traditionally, 10th grade religious school students in Louisville are confirmed on or near Shavuot. The following information has been provided by the congregations. Congregation Adath Jeshurun Saturday, May 12, 9:15 a.m. Confirmands Casse Sara Cohen, daughter of Shari and Corey …

[by Deb Aubespin and Shiela Steinman Wallace] Marie and Ron Abrams will be honored at The Temple’s 7th Annual Tribute Dinner on Sunday, June 3, at 6 p.m. at The Temple. The Abrams have been long-time civic volunteers whose commitment …