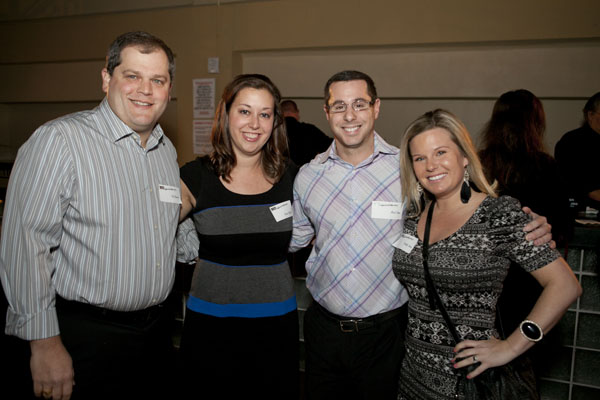 When more than 100 members of the Jewish Community of Louisville’s Young Adult Division gathered at the Ice House on Saturday, January 28, for the annual YAD Campaign event, they were in for a great evening. There was lots of good food and drinks and plenty of time to visit with friends in a comfortable, relaxed atmosphere.

The evening’s co-chair, Seth Gladstein, got things started by thanking people for coming and introducing the evening’s featured performer, mentalist Sidney Friedman, who uses his intuition for entertainment and inspiration.

Throughout his performance, Friedman reminded those present that this was a Campaign event. YAD and the Federation make things happen, he said, and support for the Campaign can make the impossible possible.

Friedman had tapped several people beforehand to write numbers or letters or draw pictures on paper and seal them in envelopes, sometimes in multiple envelopes. During his show, he called them up, talked to them and observed them and, in most cases, he was able to tell the audience what was on the paper before the envelopes were opened; and when he didn’t nail it, he came close.

Again and again, he drew different people from the audience and identified things he hadn’t been told. At one point, he did mental mathematical calculations to fill in a grid in random order chosen by a volunteer so every row, column, diagonal, corner and some four-block squares totaled 1000, a number also chosen by an audience member.

For the finale, he had a stack of sealed envelopes and had an audience member tell him when to switch their order as he paged through them. He then passed them out in their shuffled order, still sealed, to 14 people he had lined up front. When the envelopes were opened, they revealed cards that read Jewish Community of
L O U I S V I L L E !

YAD Chair Ariel Kronenberg wrapped up the evening by sharing his personal story. Born in Israel, where “there is no separation between state and religion,” he said, the state funded most of the religious institutions, it was a major adjustment when he and his wife, Faina, came to Louisville eight years ago.

“When we came here it was hard for me to accept that in order to belong, to be part of the Louisville Jewish Community, I had to pay,” he continued. “I had to pay for synagogue membership, and to contribute to the campaign, volunteer for Super Sunday, serve in boards, plan events.

“But then it all sunk in,” he said. “I didn’t have to do any of these things, I could choose to not be part, not belong, but I realized I wanted to. It was important to me as an individual and for us as a family, for my two daughters, Emma and Gabi, to grow up Jewish with a strong connection to Israel. So today I choose to be part, I choose to be a Ben Gurion, and I choose to support the JCL the best way I can.”

Kronenberg called on those present to join him in supporting the 2012 Campaign, and they responded. To date, YAD members have contributed $66,045 to the 2012 Federation Campaign.

[by Phyllis Shaikun] David Hess, a 17-year-old student at DuPont Manual High School, is a pretty competent tennis player – a talent that allowed him to spend three weeks in Israel this past summer, just for the cost of round-trip …

Purim will be here on March. The noise level in our temples and synagogues will be deafening as graggers sound and we boo and stomp to drown out Haman’s name. Children young and old will show up in costume. We’ll …