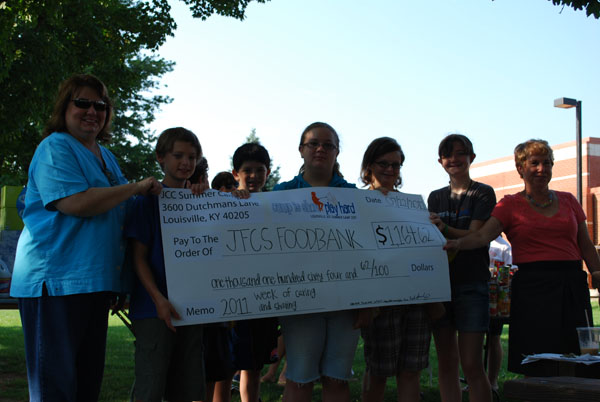 Campers at the Jewish Community Center’s Summer Camp raised $1,164.62 plus $400 worth of supplies for the Jewish Family and Career Services Food Bank during the 2nd annual Week of Caring and Sharing. Throughout the week, campers aged 16 months through 8th grade participated in many fundraisers to collect the donation. Many participated in a Swim-a-thon and preschoolers danced the mornings away to raise pledges.

Campers also hosted car washes, sold homemade cookies and told jokes. A group of campers even picked up some musical instruments and joined a traveling Mariachi band to play music for donations.
“Our campers worked hard to raise this important donation,” said Julie Hollander, JCC Summer Camp Director. “It was fulfilling to teach campers about helping others in such a hands-on way to raise money for a worthy organization.”


On Wednesday the campers got a special treat during their week of giving back. Midnight Red stopped by for a concert and question and answer session before their performance with the Backstreet Boys and New Kids on the Block.

The money raised will go to help feed needy people in the Kentuckiana area through the Jewish Family and Career Services Food Bank. This is the second annual Week of Caring and Sharing benefiting the JFCS Food Bank.