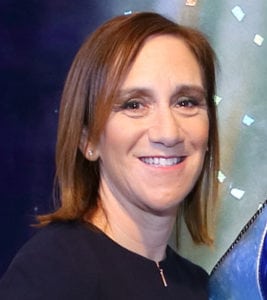 CenterStage, the oldest operating theatre company in Kentucky, has brought so much joy to so many audiences.
And the show goes on. There is more to come as CenterStage enters a new era at the Trager Family Jewish Community Center.
Last week, longtime supporters of CenterStage said goodbye to our current home at the current JCC – actors, volunteers, committee members, and grateful fans – gathered one last time in the Linker auditorium to give the space a proper send-off.
While the Omicron variant kept the crowd at this “Goodbye and Hello” event small, the gathering was warm, focusing on the last 20 years of CenterStage – a time of love, laughter, drama and song.
I want to share some of the remarks made at that gathering.
Erin Jump, director of Arts & Ideas for the JCC, kicked off the evening, by noting the space has housed 107 Mainstage productions since 2000 and 17 Academy performances since 2013 – up to 150 performances in all.
“When you consider how many shows of every production we had – some three, some eight – and how many people this auditorium can hold,” Jump said, “I’m confident in saying that we shared our art with hundreds of thousands of people.”
She thanked the people who built the theatre, those who continue to help CenterStage grow, and members of the board, including the current chair, Sarah Harlan.
She even thanked the stage itself, “where we’ve danced and fallen, sang and yelled, forgotten our lines, missed our entrances, and laughed and cried all the way through it.”
Erin noted that Andy Epstein, compared the evening to the plot of Sondheim’s Follies where a group of friends reunite in a theatre that is scheduled for demolition.
Harlan, the CenterStage chair, said she has been involved with the company for more than 20 years, first as a stage mom, then as chair of the annual fundraiser, Light Up CenterStage, and finally joining the board.
“I love what we do here at CenterStage and strongly believe in our mission of bringing the joy of live, community theatre to as many people as possible,” she said. “I’m so proud to continue our oldest community theatre in the state’s tradition of delivering entertaining, educational, challenging, beautiful works of art to our audiences.
But now, Sarah is looking forward to CenterStage’s new home.
“I’m beyond grateful and excited about the possibilities that await us in the new Trager Family JCC,” she said. “I know change is hard, and dealing with a global pandemic is definitely no picnic. But what I can tell you, with complete confidence, is that CenterStage is going to grow and thrive in our new performance space. I can’t wait to launch our next season, continuing our more than 100-year history as Kentucky’s oldest and best community theatre!”
Listening to Erin and Sarah, hearing memories shared throughout the night and seeing the room light up as performers took the stage individually to perform one last time in this beloved space was a special night. I am so grateful to this wonderful community of volunteers and professionals for what they do. I, too, believe that we must build on a tremendous history to create a bright future that is yet to come in our new home at the Trager Family JCC.

By Lee Chottiner Community Editor Since the start of his campaign for mayor last year, Craig Greenberg has literally been on the run. The Louisville lawyer and entrepreneur, who is a lifelong runner, sees his favorite exercise as a great …

Guest Columnist David Chack Rev. Martin Brooks’ Jan. 28 column in Community about the synagogue standoff in Colleyville, Texas, shows off the alliance between Jews and other leaders who have the courage to care. I do not take lightly how …