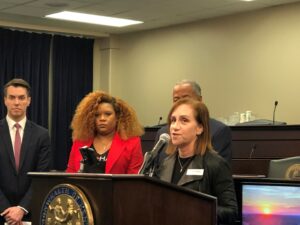 FRANKFORT – Nearly Four years after a gunman shot and murdered her father, Maurice Stallard, at the Jeffersontown Kroger, Kellie Watson still feels as though justice wasn’t quite done.
Standing before a phalanx of cameras Tuesday at a Capitol Annex press conference, at times fighting back tears, Watson described the pain she still feels knowing her father’s assailant could not be convicted of a hate crime under Kentucky law.
“It’s horrible that here in our own state, in our own home, we were not able to hold him accountable and get the justice that we needed for the hate crime that was committed,” Watson said.
A bipartisan bill introduced Tuesday to amend the state’s hate crime statute would change that.
The bill co-sponsored by three state senators from Louisville, Morgan McGarvey and Gerald Neal (Democrats) and Julie Raque Adams (Republican), would extend prison time for crimes proven to be intentionally committed because of race, color, ethnicity, religion, disability, gender identity or sexual orientation.
Penalties for class A or B misdemeanors would increase by at least half of the maximum imprisonment sentence and fine that currently exist. For class D felonies, the terms of imprisonment would increase by one to five years; for class C felonies, five to 10 years; and for class A or B felonies, 10 to 20 years.
Additionally, offenders convicted of hate crimes would not be eligible for probation, shock probation, conditional discharge, parole, or any other form of early release.
“When you commit a hate crime, you are not just attacking an individual, you are attacking the entire community,” McGarvey said. “We’ve seen this in Louisville too many times.”
In addition to the families of the Kroger shooting victims Representatives of the Louisville and Lexington Jewish communities were present at the press conference. Kentucky saw the highest number of antisemitic incidents on record in 2020, according to the Anti-Defamation League.
Sara Klein Wagner, president and CEO of the Jewish Community of Louisville, said passage of the hate crime bill, which has been introduced at least twice before, is “long overdue.”
She described as “raw” the experiences the families of the Kroger victims have lived through, noting that many other families have endured similar attacks.
“That’s why this legislation is real and that’s why it’s needed,” she said. “We know that we need to hold people accountable. We know that we need to deter the perpetrators from committing crimes, and if it stops just one person, then it’s worth every effort.”
The bill has been filed in honor of Stallard, 69, and Vickie Jones, 67, the other shooting victim.
Both died on Oct. 24, 2018, when a white gunman, who had previously tried to enter a nearby predominantly Black church, opened fire in the supermarket. He shot Stallard, who had been shopping with his grandson, then went outside and shot Jones in the parking lot.
“I never understood a person hating a person because of the color of their skin; I never did,” said Jones’ sister, Samuella Gathright.
The assailant was indicted on federal hate crime charges in U.S. District Court. He also was indicted for murder by a Jefferson County grand jury. He has since been sentenced to life in prison without the possibility of parole.
Nevertheless, the attack has raised questions regarding the state of hate crime laws in Kentucky.
“Laws have to be amended to change with the times,” said Watson, noting that Congress is amending federal hate crime law to include lynching. “We have to do so here.”

D’varTorah Rabbi Ben Freed During the Passover seder, we use one of the rarer names of God: “םוקמה” Ha’makom. This name of God literally means “the place,” and its two best-known uses are in seder and at Shiva minyans when …