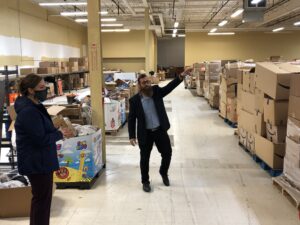 Rabbi Chaim Litvin shows off the stocked warehouse of Project Friendship in Louisville, which supplies friendship corners across the state. (Community photo by Lee Chottiner)

Project Friendship, the social service arm of Chabad of Kentucky, is opening three new permanent centers – two in western Kentucky, one in Louisville – to provide clothing and other essentials to the needy.
The openings of the centers, called “friendship corners,” were announced at a media event on Monday, Feb. 14, at the Project Friendship warehouse on Breckinridge Lane. Several dignitaries, including Kentucky Lieutenant Governor Jacqueline Coleman and Anat Sultan Dadon, Israel’s consul general to the southeastern United States, spoke at the event.
The corners, which join a network of approximately 50 such facilities across the state, provide clothing, coats, boots, kitchenware, household items and one luxury: jewelry.
“It would be something special for people who lost everything,” said Project Friendship CEO Rabbi Chaim Litvin.
The two western Kentucky corners, in Bowling Green and Madisonville, will assist survivors from last December’s tornadoes as they rebuild – an effort that will take years.
“You’ve now seen the tip of the iceberg,” said Rabbi Avrohom Litvin, regional director of Chabad of Kentucky. “The needs (of those communities) are much more than the one-time help many organizations have given them. We’re standing by for as long as it takes western Kentucky to get back on its feet.”
Project Friendship was on the ground shortly after tornados tore through western Kentucky on Dec. 10, devastating towns, killing 77 people and causing millions of dollars in damage.
Within days, Project Friendship had delivered more than $1 million in necessities, including pallets of bottled water provided by the Israel Consulate, to stricken areas in Bowling Green, Hopkinsville and Mayfield.
The third corner, to be housed in the volunteer lounge at the Jewish Family & Career Services, will be open to anyone who can access the Meyer Food Pantry.
JFCS Chief Executive Officer David Finke said interagency cooperation like this is essential to provide a safety net for Kentuckians in need.
“Unless we all have partnerships across agency lines,” Finke said, “we will not be able to serve the likes of our children and families in our commonwealth.”
Also at the event were Eric Friedlander, secretary of the Kentucky Cabinet for Health and Family Services, and Melissa Goines, director of the Division of Family Resource and Youth Service Centers. Chabad also played a taped message from U.S. Sen. Mitch McConnell.
Chaim Litvin said all corners in the network occupy rooms in other facilities – schools, community centers, social service agencies – to hold down costs.
Nevertheless, there are expenses related to such an operation, with transporting items from the warehouse to the corners being the biggest.
Project Friendship also relies on volunteers to sort and pack the items at its warehouse.
“We fundraise for it; that’s what we do,” Chaim Litvin said. “We get the items at no cost, and we give them away at no cost. [But] picking them up and dropping them off cost money. It’s a skeleton budget.”
Litvin said no one, not even he, takes a paycheck.
“No has made anything off this enterprise; it’s strictly a social service.”

Guest Columnist David Chack Rev. Martin Brooks’ Jan. 28 column in Community about the synagogue standoff in Colleyville, Texas, shows off the alliance between Jews and other leaders who have the courage to care. I do not take lightly how …