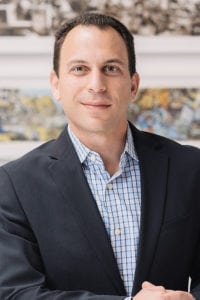 Since the start of his campaign for mayor last year, Craig Greenberg has literally been on the run.
The Louisville lawyer and entrepreneur, who is a lifelong runner, sees his favorite exercise as a great way to introduce himself to the city – both the parts where he is known and not so known.
“I’ve been running across the whole city,” Greenberg said. “There are 623 precincts in Louisville. Before the shooting happened, I’ve run through 504, so I’ve been in almost every corner of our city on foot and I met with people from all corners of the city representing all political ideologies.”
That’s what Greenberg, the only Jewish candidate in the upcoming mayoral primary, wanted to talk about Monday in an interview with Community: the people he has met, and the issues they have in common.
He talked about the need to end gun violence in Louisville, a city that had 188 homicides last year.
But he wouldn’t address what other people are saying about the Feb. 14 attempt on his life or his accused attacker, 21-year-old Quintez Brown. He declined to speculate on a motive for the shooting and he refrained from mentioning Black Lives Matter (BLM) by name.
BLM, through its Louisville Community Bail Fund, posted Brown’s $100,000 bond last week. He remains free, though he wears an ankle bracelet, enabling authorities to track his whereabouts.
That alone drew scathing rebukes from, among others, Sen. Mitch McConnell of Kentucky, who referred to Greenberg as a “Jewish Democrat,” to Brown as a “far left Black Lives Matter and defund-the-police activist” and to BLM itself as “the radical left [that] bailed their comrade out.”
Greenberg declined to respond.
“I’m not commenting on what others are saying about this matter; I don’t think that’s appropriate at this time,” he said. “There are so many other issues in our city we need to address…. All these things are also related to making a safer city.”
He did confirm that he agrees with BLM on at least one issue: mental health treatment for offenders behind bars.
He wouldn’t comment on Brown’s bail or BLM’s opposition to cash bail other than to say “I think what happened in my case is a reflection of a criminal justice system that is broken.”
Earlier, though, Greenberg had said, “It is nearly impossible to believe that someone can attempt murder on Monday and walk out of jail on Wednesday.”
He kept returning to gun violence, his signature issue, calling for violence intervention programs to reduce homicide rates, investment in law enforcement (particularly for community policing and crime prevention) and more spending on the root causes of poverty.
Brown is accused of standing in the doorway of Greenberg’s campaign office on Feb. 14, taking aim at the candidate with a 9 mm Glock and firing. One shot grazed Greenberg’s clothing before campaign workers barricaded the door.
Police apprehended Brown and the weapon not far from the scene, according to news reports. He is charged with attempted murder and four counts of wanton endangerment.
Greenberg, who said he has never met Brown, confirmed that the shooting will change the way he conducts his campaign.
“We are taking precautions so we can proceed with my campaign in a safe manner,” he said. “I plan to continue to meet with a lot of people and to have a very active campaign, but we will be taking a new set of precautions as we move forward.”
He wouldn’t say what those precautions will be.
Neither would he say campaigning by all candidates could change because of the attack, though he confirmed speaking to several of his opponents since the shooting.
“I have this new unwanted experience that informs my feelings and my actions on the issue of eliminating gun violence in our city,” Greenberg said. “I know I am blessed to still be here today and that many others have suffered worse from gun violence.”