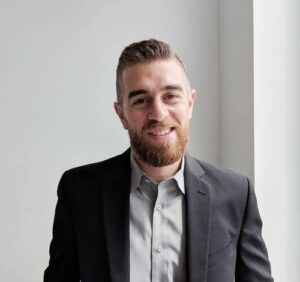 Rabbi Joshua Corber has been hired to be the next senior rabbi of Adath Jeshurun, the congregation announced Tuesday.
Corber, who will start his new rabbinate on July 1, will be responsible for all rabbinic duties at AJ, but Rabbi Robert Slosberg will assist him during a transition period before becoming rabbi emeritus on July 1, 2023.
Corber currently serves as the rabbi of Beit Rayim, a Conservative Egalitarian congregation in Ontario, Canada. He and his wife, Chloe, have two children: Eliana, 5; and Isaac, 3.
Corber’s hiring caps a two-years hiring process to find a successor to Slosberg, who has served AJ for 41 years.
Corber will become just the fourth rabbi of AJ since 1917. The congregation was established in 1856.
Though the Corbers visited Louisville during the search, AJ could not hold large gatherings for members to meet them because of the pandemic, and rules associated with international travel.
Community will publish an interview with Corber as soon one can be arranged.

D’var Torah Rabbi Avrohom Litvin I just heard of a young couple that has lived apart during the COVID pandemic. He lived in New York, she in Canada. The borders were closed, so they couldn’t be with each other physically. …