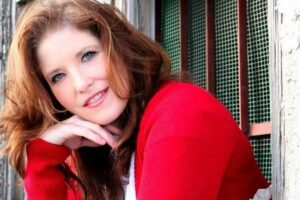 In a historic moment for Louisville’s oldest Jewish congregation, The Temple has hired its first cantor to be its next full-time spiritual leader.
Cantor Lauren Furman Adesnik, of Atlanta, Georgia, will succeed Rabbi Joe Rooks Rapport, who is retiring on July 1 after 34 years. She will serve alongside Senior Rabbi David Ariel-Joel.
While The Temple had a student cantor, Mike Jarvis, from 2018 to 2019, “this is the first time in 178 years of our Temple that we are having an ordained cantor,” Ariel-Joel said.
In an interview with Community, Adesnik said she was “humbled” by her selection.
“What comes through at The Temple is this amazing joy for Judaism and Jewish life and this honoring of history,” she said.
She also detected “a real presence for growth and elevation and creativity and that really excited me.”
Originally from California, Adesnik has been the cantor of Temple Emanu-El of Greater Atlanta since 2013. During her time there, she has developed adult and junior choirs, mentored teen singers, produced a concert series of various genres, incorporated musical congregants into worship and musical programs, revived the synagogue’s parody troupe and fostered musical experiences in the greater Atlanta Jewish community.
She also has soloed with the Atlanta Community Symphony Orchestra, and with the Atlanta Symphony Orchestra, bringing Jewish classical music, musical theater and Yiddish music to metro Atlanta.
Pretty impressive for a cantor who was born with a hearing loss.
“I have worn hearing aids since I was 9,” Adesnik said. Nevertheless, it has never affected her singing or her ability to match pitch.
“My hearing loss has never gotten in the way, magically,” she said. “This is one of the reasons why I so firmly believe that this is my calling and what I’m meant to do in life.”
Coming to a synagogue with no cantorial history poses a challenge, Adesnik said, particularly for worshippers who don’t fully understand her role.
Beyond singing, she explained, cantors fully engage in pastoral care, provide a “compassionate presence” at moments of sorrow and joy, craft sermons and teach. (She’s teaching a class right now in Atlanta on the history of Lecha Dodi, the liturgical poem that welcomes Shabbat.)
And, of course, cantors use their voices to build “sacred relationships” among their congregants.
“It’s not about performing on the bima on Shabbat or holidays, it’s about serving as a prayerful pastoral presence” Adesnik said. “For those who have never experienced a cantor, they may think we’re just limited to Jewish music, and that may be true for some cantors, but for me I feel I share my Judaism in a very well-rounded way.”
Though not yet in Louisville, Adesnik is already thinking of programming on which to build her cantorate here.
She hopes to start a musical series of artists-in- residence, a “symphony in the sanctuary,” much like she has done in Atlanta, highlight Jewish classical music and themes through symphonic and vocal works, and incorporate instruments into Shabbat services.
“Right now, I’m in the building block stage” she said of her plans.
A graduate of the University of Southern California with a bachelor’s degree in music and vocal arts performance, Adesnik was ordained by Hebrew Union College-Jewish Institute of Religion in 2013.
As a student cantor, she has served congregations in Connecticut and New Jersey.
Her husband, Moshe, the son of a rabbi and a microbiologist, develops software for T-Mobile. Together, they have a 10-month-old daughter, Lavender, and a 6-year-old standard poodle, Wally.
They also have a booster in Rapport, who has spoken with Adesnik and said he is “thrilled” that she is joining the Temple staff
“This was a very competitive process and we are blessed to have found a cantor with the energy, enthusiasm, love of families and children, and of course such a beautiful voice,” Rabbi Rapport said.
He added that Adesnik was a classmate of his daughter, Rabbi Yael Rapport, at HUC in New York. Ariel-Joel said the congregation decided to hire a cantor for the first time, with 92 percent of the members at an annual meeting voting in favor.
The vote followed “a year of discussions, meetings and a true congregational process,” Ariel-Joel added.
He called the congregation’s experience with then-Student Cantor Jarvis “an essential part of the process that made the decision easier.”
“We got extremely lucky that the best candidate we had, our number one candidate, agreed to serve the Temple,” Ariel-Joel said. “Cantor Lauren is an amazing person, a true mensch.”

D’var Torah Rabbi Avrohom Litvin I just heard of a young couple that has lived apart during the COVID pandemic. He lived in New York, she in Canada. The borders were closed, so they couldn’t be with each other physically. …

By Ron Kampeas JTA A gunman opened fire on a Jewish Democrat who is running for mayor of Louisville, Kentucky. Craig Greenberg, the candidate, said he is safe, and the police said one possible motive was the fact that the …