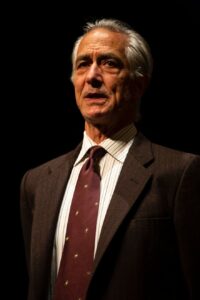 Louisville Jewish theatrical director David Chack will appear with Emmy Award-winning actor David Strathairn in a Feb 23 virtual program about the life of World War II-era Polish resistance fighter and diplomat Jan Karski.
The program, Remember This: Jan Karski’s Legacy will be presented as part of Taube Talks, a series of programs by the The Taube Center for Jewish Life & Learning, dedicated to enriching Jewish life in Poland and to connecting Jews from around the world with their East European heritage.
Strathairn, best known for his performance as Edward R. Murrow in the Academy Award-nominated Goodnight and Good Luck, will portray Karski, while Chack, artistic director of the ShPIeL Performing Identity and a professor in the Theatre School at DePaul University, Chicago, will join a panel discussion of the actor’s factual dramatization of the Karski’s story.
Karski is remembered for acting as a courier to the Polish government-in-exile and its Western allies about the atrocities happening in Poland from 1940 to 1943. His reports included details of Germany’s destruction of the Warsaw Ghetto and its operation of extermination camps.
His reports of the Holocaust even reached the White House, only to be met with inaction and disbelief.
“David Strathairn’s consummate performance in this solo piece, that we’ll show clips from and discuss with him, reveals how Jan Karski exposed the death camps to world leaders,” Chack said in a statement.
Adjacent to story, Chack added, is the story of Shmuel Zygelbojm, a Polish Jew who worked tirelessly in the Polish Council in Exile in London, with Karksi’s information, “and tried to wake up the world as well as Jewish leadership in England and the United States.”

Want to go?
The program will be streamed at 2 p.m., Wednesday, Feb. 23. To register, visit taubecenter.org/tjhtalks24-dyc/.

(Due to an editing error, the following item appeared in the Jan. 28 Community with factual errors. The corrected version appears here.) The Louisville-based Jewish Association of Spirituality and Dreams (JASD) will hold its first community-wide women’s Dream Circle in …

By staff and releases With the brutal invasion of Ukraine completing its second day, with Russian forces closing in on the capital city, Kyiv, Ukrainian Jews here are watching the situation unfold in their country, aghast at what is happening …