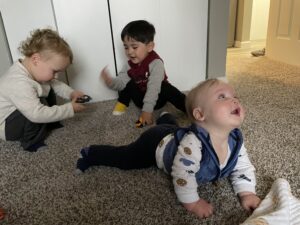 The evacuation of Afghanis from Afghanistan last August evokes dramatic images of thousands rescued and thousands left behind, as the country fell to the Taliban.
Army Capt. Jules Szanton, who served in Afghanistan, watched those scenes of chaos back in the states, but he also contributed to the harrowing escape of one of those families: his friend and interpreter Aziz Hussaini and his wife and son.
Both families now live in Louisville.
“When I left [Afghanistan], I told him to stay in touch,” said Szanton, a Maine native, lawyer and officer in the Judge Advocate General’s (JAG) Corps, stationed at Fort Knox and a member of the small orthodox synagogue Anshei Sfard.
Hussaini did what he was told. When the Afghan capital, Kabul, fell, he called Szanton, who made a promise that he would find more complicated to keep than he imagined.
“When I told Hussaini I would help him, I assumed this would be a controlled, orderly process,” Szanton said. “I didn’t think it would be such absolute chaos. There were heartbreaking scenes of people passing children over the fence. These are people who believe in the values our country stands for. They have sacrificed and risked their lives for those values. They’ve lost their country. They’ve lost their homes and possessions.”
That description fits Hussaini, a 31-year-old interpreter, who, with his wife, Mariam (seven months pregnant) and their 2-year-old son, Arsalan, made the journey to Louisville – 7,000 miles from Kabul.
Their saga really began in the aftermath of the attacks of Sept. 11, 2001. When NATO forces invaded his home country in a war against the Taliban, patrons of 9-11 perpetrators al-Qaeda, he decided to join the struggle as an interpreter.
He graduated from a Kabul university in 2016 with an international relations degree, got a job with an American company as a senior interpreter and went to work at the Kabul headquarters of NATO.
“I was motivated financially, but I also thought I needed to be useful to serve my country,” Hussaini said. “The Taliban are the most brutal people, and I was helping my people and my country.”
Hussaini said he was fighting for democracy, freedom of speech, women’s rights and minority rights – including the rights of the Hazara, his own ethnic group and a favorite target of the Taliban.
One of Hussaini’s cousins, also a Hazara, remains trapped in Afghanistan, moving from place to place, to avoid capture, ever since locals turned in his name to the Taliban. If he’s caught, he will be interrogated and killed.
Hussaini remembers the precise day when he and his wife decided to leave Afghanistan. He contacted Szanton and the family plotted their escape.
They made several efforts. On their seventh try, they stood at the airport gate and watched in terror as three others, among a throng of would-be escapees, were shot to death by the Taliban.
Hussaini was terrified.
“I was holding my son’s hand in my right hand and my wife’s hand in my left,” he said. His backpack held all that his family was taking with them.
“We left everything behind,” he said.
“Everything” included his two brothers, 19 and 17; his mother and father; other family members and friends. His brothers had gone to the airport with Hussaini, but they became separated, and Hussaini was holding the documents they would have needed to enter the airport.
Finally, 24 hours after arriving outside the airport, Hussaini and his family were sitting on an airplane, about to start a journey that would take them to Qatar, then Washington, D.C., and finally to Louisville, where they were reunited with Szanton and his family.
They soon moved into their own apartment and have been receiving essentials for their new home, gifts from their new neighbors and friends.
“I’m very grateful to Jules, his family, his friends, and the people of Louisville,” Hussaini said.
Szanton’s answer: “We are just trying to be good friends.”
Asked to explain how – if at all – he can explain his actions to help rescue Hussaini to his belief as a Jew, Szanton said Jews have found themselves in the same predicament.
“I thought about the many times in Jewish history when we’ve been forced to leave our homes or have struggled to find a place where we can find safety,” Szanton said.
He also cited the Jewish value of hakarat hatov, or gratitude. “Hussaini looked out for me when I was in Afghanistan, so this is my chance to help him feel at home here in America.”
Every two weeks, Hussaini talks to family members in Afghanistan. He desperately wants his brothers to get out, “so I’m asking everyone I know: Can they help?”
Hussaini had hoped the United States would maintain its military presence in Afghanistan, but he said he has left behind that part of his life. He wants to work in Louisville as a locksmith or HVAC technician, and eventually own his own business.
He has another dream:
“I hope I can go back (to Afghanistan),” he said, pausing, “as a U.S. citizen.”

D’var Torah Rabbi Simcha Snaid What does it mean to be a Jewish person? I am sure we have many different answers and views to this question. (I would love to hear yours; please send them to rabbisnaid@ansheisfard.com.) For now, …

Fred Gross, 85, of Louisville, a journalist, author and leading advocate for Holocaust and genocide education, passed away with his family by his side on Wednesday, Dec. 29, 2021. Fred was one of the last Holocaust survivors in Louisville to …

By Rabbi Beth Jacowitz Chottiner For Community “Please pray for the safety of my colleague and friend Rabbi Charlie Cytron-Walker, and his family, as well as all members of Congregation Beth Israel in Colleyville Texas,” wrote my former professor and …