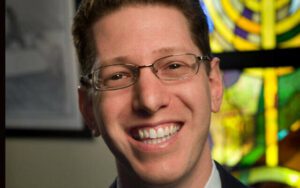 “Please pray for the safety of my colleague and friend Rabbi Charlie Cytron-Walker, and his family, as well as all members of Congregation Beth Israel in Colleyville Texas,” wrote my former professor and now colleague, Jonathan, in Cleveland.
As I read this post, I had no idea about what he was talking. I had not yet heard what was unfolding in Colleyville.
Then the phone rang. It was Michelle, another friend and colleague, calling from Minnesota. “Do you have Adena’s cell phone number?” she asked. (Adena is Charlie’s wife.)
Now, the peace of Shabbat shattered, and so did the security of Charlie – friend, classmate, colleague – and that of his family, congregants … all of us.
I met Charlie in Jerusalem in 2001, when we began rabbinical school at Hebrew Union College-Jewish Institute of Religion. We also spent four years together on the Cincinnati campus, where we saw each other practically every day.
After Michelle’s call, I turned on the TV. With fear and horror, I watch for the next eight hours as events unfolded. My classmates – those of us who spent that Israel year together – were doing the same. We spent the day talking, texting, supporting each other, hoping and praying for a safe outcome.
Learning that Charlie’s family was not inside the synagogue lent a measure of relief, but not much, honestly, for we knew they were terrified.
Learning that a colleague was with Charlie’s mom was also welcomed news, but, again, not much relief. This was real – FBI real, cable news real. This was Charlie, whose pictures dot my photo albums, who sported a red nose during the Purim party, who traveled with me to Poland.
If anyone in my rabbinic class dedicated himself to equality, justice, seeing the humanity in everyone, it was Charlie. He was, and still is, a social justice giant.
He works tirelessly to build interfaith bridges and bring about understanding between people; his compassion for those in need, his sincere desire to help others, is second to none. Charlie makes this world a better place for all G-d’s children.
In fact, Charlie and Adena are so committed to equality, that they used to refer to each other as their “partner,” not husband or wife. I asked them why when I first met them in Jerusalem. “Since same-sex couples can’t get married and can’t use the terms ‘husband’ or ‘wife;’” they responded, “‘we won’t use those terms either.”
Despite my anxiety and fear during that Shabbat, a Shabbat that was anything but a day of peace, I believed, with all my heart, that Charlie was doing his best to connect with the hostage-taker – talking about their children, finding things they had in common, seeking the humanity in the gunman’s soul.
He did. Not only did the FBI commend Charlie for his calm demeanor during the stand-off, but even the perpetrator said he liked him. No surprise there; that’s Charlie.
Ten days have passed, and life has not returned to normal. Not for Charlie, Adena, their children or their congregants. Not for me, and I suspect not for any of us. The emotional healing has just begun; we all have a long road ahead.

(Editor’s note: Rabbi Simcha Snaid (above) is pictured having fun with the UofL and UK murals in the basement of the new Anshei Sfard building at 2904 Bardstown Road. The building, which is undergoing extensive interior renovations, should be ready …

By Michael Ginsberg For Community The evacuation of Afghanis from Afghanistan last August evokes dramatic images of thousands rescued and thousands left behind, as the country fell to the Taliban. Army Capt. Jules Szanton, who served in Afghanistan, watched those …

D’var Torah Rabbi Simcha Snaid What does it mean to be a Jewish person? I am sure we have many different answers and views to this question. (I would love to hear yours; please send them to rabbisnaid@ansheisfard.com.) For now, …