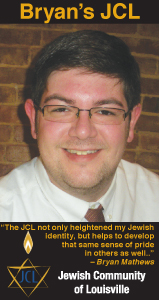 Bryan Mathews was raised in Bullitt County, an area just south of Louisville, where the number of Jewish residents could be counted on the fingers of one hand with a few left over. Now 28, he was the only Jewish student at Bullitt Central High School but doesn’t recall ever being taunted about it. His mother is Jewish, and he says the precepts of Judaism always resonated with him.

The Jewish mitzvah of tikkun olam, repairing the world, has been Mathews’ mantra for as long as he can remember. A volunteer at the Louisville Zoo when he was just 12, he was thrilled to be asked to stay on after the summer vacation ended. In high school, he was a member of the Historic Preservation Club and helped restore a historic 150-year-old cemetery that has since become a centerpiece in the city.

As a student at Western Kentucky University, he got involved with the community in Bowling Green and took advantage of the opportunities the city had to offer. He also grabbed the chance to participate in a Birthright Israel trip and came away with an increased appreciation for Judaism. He even considered living in Israel for a period of time.

“I started out wanting to be an astronaut,” he muses, “but realized that any future career I chose would have to focus on public service. I believe in a progressive platform that relies on everyone doing their part to move us forward toward a goal of fair treatment with everyone benefiting from our efforts.”

With the encouragement of his uncle, attorney and active Jewish community volunteer David Kaplan, Mathews has become more involved and currently serves on the Jewish Community Relations Council, which he thinks is a “great fit” for his interests. He co-chairs the Legislative Committee with Carl Bensinger and serves on the Executive Committee.

“The JCRC has a wide net in public service,” says Mathews, “and members work hard at articulating the position of the Jewish community.” He also takes part in the JCL’s Young Leadership Development program.
In the community, he served four years on the Cherokee Triangle Neighborhood Association and is director of the food court at the annual Cherokee Triangle Art Fair.

In 2010, when he was just 26, he successfully ran for Jefferson County Judge Executive and became the youngest Judge-Executive ever elected in the state. He has gained the respect and credibility of his colleagues and is proud that he and his 118 fellow county judges from across the state helped pass House Bill 463, prison reform legislation that saved the Louisville Metro government $15 million in prison costs and saved $40 million per year to county governments statewide. He is currently a candidate for the 8th District Metro Council (in the Highlands).

Although his position is more under the radar than it once was, Mathews says  the county government folks with whom he works look out for their neighbors and everyone else too. “When the community works together, he says, “amazing things can happen – just like at the JCL. I really feel sorry for those who don’t get involved in a cause. You really should try to improve the quality of life for all people.”

There was a time, not long ago, when being Jewish meant being a member of a congregation, praying in services in a synagogue and paying to belong. It often seemed like an obligation – this was the way things were …