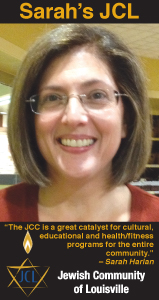 Sarah Harlan has lived in Louisville with her husband, Michael, and their three children since 2001. From the time they arrived in the city, she has been involved in a variety of activities – both in and outside of the Jewish community – that have made her and her family’s transition here an easy one.

Born in Virginia, Harlan grew up in Pittsburgh, where she was active in her synagogue’s youth group and attended the Hebrew High School for Advanced Jewish Studies. She graduated from Stanford University, where she earned a degree in human biology and health policy, and later received a master’s degree in public health and healthcare management from UCLA.

The Harlans have lived in California, Kansas City and Memphis, and in each place she took an active role by working with her children’s schools, teaching in Sunday and Hebrew school programs or volunteering with various community organizations. The bulk of her time in Louisville has been spent doing things that benefit Louisville Collegiate School, where her daughter is a student. She headed the school’s Parents Association for three years and held other positions as well.

She became part of the National Council of Jewish Women, Louisville Section’s Adopt-a-School program early on, continuing an association with the organization that began when she served on the board of NCJW in Kansas. She also began tutoring and reading with students in the pubic schools and eventually began teaching at The Temple Hebrew School, something she also did at the temple in Memphis.

While serving on the Louisville Jewish Community Center Board, Harlan became the board liaison to CenterStage, the JCC’s theater program, and has been a member of that board since 2007. The theater company has truly been a family affair since both her husband and two daughters have taken roles in CenterStage productions. For the past two years, she has chaired the company’s very successful Light Up CenterStage fundraiser. She also chaired the JCC’s Jewish Festival of the Book for several years.

Although Harlan is currently busy teaching Hebrew school and serving as president of the Parents Association at St. Francis High School, where her son is a sophomore, her involvement with the JCC and CenterStage continues. “The JCC is a tangible thing,” she says, “in that it provides so many services for me, my family and the entire community.”

Mike Harlan is President/CEO of Breeze-Eastern Corp. in New Jersey and commutes back and forth to Louisville on a bi-weekly basis. Their children are Jennifer, age 22 and a senior at Brown University; Sadie, 18, a senior at Collegiate and Joseph, who is 16.

Stage One Family Theatre will present Number the Stars at the Kentucky Center for the Arts’ Bomhard Theater on Sunday, February 19 at 2 and 5 p.m. During the German occupation of Denmark in World War II, the Nazis closed …

[by Phyllis Shaikun] You might remember reading about Jeremy Podgursky last month in the Courier-Journal’s December 11th edition. The paper gave the 35-year-old composer, who grew up in Louisville and is currently a Jacobs Doctoral Fellow and associate instructor in …