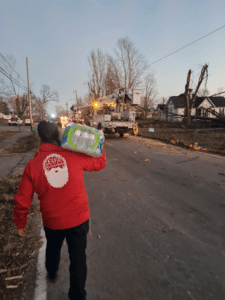 Rabbi Chaim Litvin of Chabad of Kentucky delivers bottled water in Hopkinsville, one of the western Kentucky communities hard hit by the tornado. (photo provided by Chabad)

(This is an updated version of an earlier story)

Jews in Louisville and elsewhere are stepping up to help the people in the tornado-ravaged region of western Kentucky.
The Tornado Relief Fund set up by the Jewish Federation of Louisville has raised $50,000 in its first 48 hours and more than $60,000 overall.
But help is coming in many other forms, too. Every available slot of a Dec, 16 Red Cross blood drive held in the old Anshei Sadr building was filled. More blood drives are anticipated.
Chabad of Kentucky is delivering and distributing $50,000 of bottled water purchased by the Israeli Consulate in Atlanta. The first truck arrived on Monday in Hopkinsville.
Further, Israeli consul general, Anat Sultan-Dadon, visited Hopkins County Friday to deliver 400 backpacks to the school district filled with water, snacks games and writing materials for the children.
Chabad also has delivered winter apparel to the areas, according to statement from the organization. More trucks will be sent in the coming weeks. Louisville Hadassah is assisting Chabad.
Sara Klein Wagner, president and CEO of the Jewish Community of Louisville, said she has received many calls offering their sympathies as well as tangible help.
Among the organizations that have reached are Jewish Federations of North America, JCC Association of North America and Combined Jewish Philanthropies of Greater Boston.
“People have reached out,” said Wagner, who also has conferred with Mindy Haas, executive director of the Jewish Federation of the Bluegrass (Lexington) about ways that the two federations could help.
Likewise The JCL is talking to the Red Cross about ways to help in addition to blood drives – raising funds, volunteers, preparing meals.
“[They] really asked that we stay on the list that [they] can be reach out to after the initial fervor of people rushing in to help wanes,” Wagner said, “so we can help when some of this dies down and they need more help. It’s the long game.”
Want to help?
The Tornado Relief Fund web page is still accepted contributions. Those who wish to contribute in other ways can contact Stacy Gordon-Funk at sgordon-funk@jewishlouisville.org.