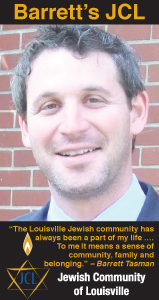 Barrett Tasman is a Louisville native whose parents, grandparents and other family members several generations back can trace their ancestry to the city. “And most of us are still living in town,” says Tasman, who is involved in real estate/project management and construction services with the Tasman Properties Group.

“I grew up at the Jewish Community Center,” he recalls. “I played in the basketball leagues at the Center and actually played all kinds of sports there. Now my daughter, Blake, does kids type activities at the JCC.”

“My wife, Abby, was welcomed to the community with the Jewish Community of Louisville’s (JCL) Shalom Baby and the PJ Library programs. She is really involved in various groups now I have done things vicariously through her. I attend everything she takes me to!”

Tasman’s interest in becoming part of the organized Jewish community was prompted by his dad’s partner, Ed Cohen, a former Jewish Community Federation President, who urged him to take an active role in community efforts. Last year, Tasman was a member of the JCL’s Young Leadership Development (YLD) program and this year, he is serving as an intern on the JCL Board. “I have attended two board meetings,” he says, “and plan to work on the Federation Annual Campaign as well.”

Both Tasman and his wife have helped raise funds for the Adath Jeshurun Preschool, which their children attend, so they understand the financial needs community agencies face. Abby has headed the preschool board for several years and is familiar with having to find ways to raise funds to move ahead.

The Tasmans are members of the Jewish Community Center and their children are the second generation to attend the Center’s summer camp program. They are expecting their third child in December, and are committed to ensuring that Jewish community services will be available for all of their children in the future.