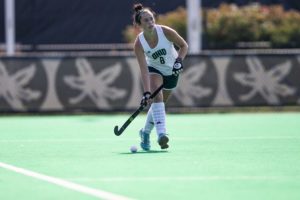 A Louisville woman will compete in the 21st Maccabiah Games next July in Israel.
Bentlea Schwartz, 18, a freshman at Ohio University, has been named to Maccabi USA’s 18-athlete roster for the open women’s field hockey team. She earned a place on the squad following tryouts this past summer in Stevenson, Maryland.
Schwartz, who will be making her first trip to Israel while competing in her first international event, is looking forward to the experience.
“It’s a chance to deepen my faith and connect with my roots and play field hockey at the same time,” she said.
Schwartz has been playing field hockey since the fifth grade. At Assumption High School, where she played defense, her team won the 2019 state championship. She also competed in the National Futures Championship – a feeder program to potential Olympic teams and an opportunity to be recruited by college athletic programs. She currently plays for Ohio U.
Schwartz said she was not aware of the Maccabiah Games until her mother saw a posting and brought it to her attention.
The daughter of Kim and Scott Schwartz, Bentlea, who grew up attending The Temple, joins a high-power team of athletes from the University of Pennsylvania, Georgetown University, Amherst College, MIT and Wellesley College, to name a few schools – all competing for gold.
“It would be pretty cool to come away with a medal,” she said.
First held at Ramat Gan in 1932 with 390 athletes from 18 countries, the Maccabiah is considered the Olympics for Jewish athletes. Traditionally held every four years, it has been interrupted only by World War II.
The last Maccabiah in 2017 attracted nearly 10,000 Jewish athletes from more than 75 countries, making the games the third largest international multi-sport event in the world, after the Olympics and the FIFA World Cup.
The Maccabi USA delegation sent 1,131 members to the 2017 Games, the largest traveling delegation in the history of Jewish sporting events.
The last Jewish Louisvillians to compete in the Maccabiah were Peyton Greenberg, a swimmer from Northwestern University, who won two silver medals, and Andrea Glazer, an equestrian from Auburn University, who also won a silver. Both women competed in the 2017 Games.

D’var Torah Rabbi David Ariel-Joel This month, we continue reading the Torah portions from the book of Genesis and the questions it poses. How the world was created and who created it are two of those questions that all curious …