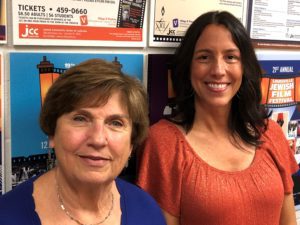 For the first time in 18 years, the Louisville Jewish Film Festival (LJFF) is about to change hands.
Marsha Bornstein, director of the LJFF since 2005, has announced her retirement in November, but will assist in preparation for the next festival in February.
She will be succeeded by Tricia Kling Siegwald, who was recently hired to be the Jewish Community Center’s senior director of festivals and special projects, a new position that includes responsibility for the LJFF and planning for the opening of the new Trager Family JCC.
For Bornstein, the upcoming film festival marks the end of a 37-year career at the JCC, in which she ran not just the LJFF, but CenterStage, the book festival, camp programs – basically anything involving, arts and humanities.
Her career was capped by the 2021 LJFF that had to be screened virtually since the COVID pandemic had forced cinemas to go dark.
Nevertheless, that festival made a profit – the most in 18 years – and Bornstein kept her perfect record: In her time running the LJFF, they never lost money.
“I wanted to go out on top, and last year was very successful,” she said.
Siegwald, who most recently served as vice president of events for the Kentucky Derby Festival (KDF), knows well what it’s like to plan annual events.
The University of Louisville graduate spent 25 years working at the KDF, managing the Pegasus Parade, the Basketball Classic, Kroger’s Fest-a-Ville and the Great Steamboat Race.
And though she’s never actually run a film festival, she knows how get up to speed on things – fast.
For instance, she had to learn how to book concerts for the KDF.
“I became a music person,” she said. “I learned about all the genres and I followed all these different news outlets. I became very well versed in every type of music and had to know what was hot out there. I’d like to do the same with films.”
Bornstein said the film festival is in good hands. “She (Siegwald) is going to bring her own creativity to it, and she has new thoughts. She’s looking at it objectively.”
A partial list of selected films will be decided on Oct. 30. As in past years, the committee has been privately screening pictures from a strong pool.
“You could have two festivals of films and have two good festivals,” Bornstein said.
Bornstein’s career at the JCC began in 1984 as chair of the Middle School committee. She even staffed the program herself.
Bornstein worked with JCC youth for 12 years, including camps, after which then-Executive Director Howard Schultz placed her in charge of the Cultural Arts Department, with responsibility for the Patio Gallery, orchestra, classes and CenterStage.
She recalls CenterStage as the hardest job she had at the JCC, lacking the equipment today’s shows have and dealing with some snafus.
“One time, I went home at 4 a.m. and we were opening that night,” Bornstein said. Before the show started, though, “we had no lights. It was a miracle they came on.”
Still, she managed to sell out many shows.
After time away from JCC to care for her mother, Bornstein returned to the center to run the book festival, the Goldstein-Leibson Scholar-in-Residence and the LJFF.
At the time, the festival consisted of five movies and no post-screening programs.
Things have changed. The number of screenings has at least doubled. Speakers, including filmmakers, have been booked. Opening Night has become a gala event.
And the films are better, especially the Israeli films.
“It is unbelievable what has happened to that industry in Israel,” Bornstein said. “When I started doing this, being mailed 35mm reels, which weighed a ton, just all the logistics were really difficult, and it was really difficult to find an Israeli film that was good.”
LJFF attendance also has grown, even during the pandemic. According to Bornstein, the 2020 festival – before the pandemic – drew 1,900 participants.
“Last year, we had 2,000,” Bornstein said, “but it was households, so that could have been translated into well over 3,000…. That’s a quantum leap.”
The most satisfying part of the 2021 LJFF, though, was how it drew in people who had not been patrons.
“I looked every day at who signed up, who bought those tickets, who donated, and there were different names,” Bornstein said. “That made the difference for me. We had broadened our scope, we had reached people that we did reach in the past 20 years, and a lot of them were Jewish; they had never come.”
That is the benchmark from which Bornstein and Siegwald hope to grow this year’s festival, whether it is all virtual or a hybrid with some live screenings. (The decision has not yet been made.)
“Learning under Marsha has been great,” Siegwald said.

By Lee Chottiner Community Editor   Jewish Louisville is helping to settle and acclimate new arrivals from Afghanistan as the city prepares to accept hundreds of people recently evacuated from the war-ravaged country. Kentucky Refugee Ministries (KRM) is settling as …

By Lee Chottiner Community Editor Rep. John Yarmuth has supported Israel during his 15 years in Congress, though he hasn’t always walked in lockstep with Israeli leaders. He has condemned former Prime Minister Benjamin Netanyahu for using violence to quell …

By Michael Ginsberg For Community When the COVID pandemic reached Louisville in early 2020, the leaders of the city’s Hebrew schools responded the same way as most other U.S. educators: They switched to virtual learning and scrambled to find ways …