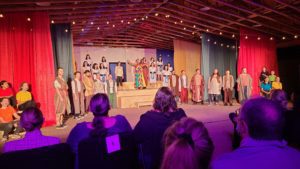 A cast scene from Joseph and the Amazing Technicolor Dreamcoat. (Community photo by Lisa Hornung

CenterStage just had its first opening night since February 2020, but it wasn’t in its usual location.
The Oct. 4 opening of Joseph and the Amazing Technicolor Dreamcoat was held before a smaller, though sold-out, masked and socially distant crowd at Farmington Historic Plantation.
The show went on under the pavilion, staged after dark and lit by strings of lights hanging from the ceiling with CenterStage chairs spaced out in pods of guests who sat with their friends and family.
Ushers lit the gravel walkway for guests walking to their cars, which were parked next door at Sullivan University. Those who couldn’t walk far could be dropped off in front of Farmington.
Erin Jump, J arts and ideas program director, said she was pleased with the outdoor setup.
“I think that all the elements came together in the best way,” she said. “Everyone came … ready for a show…. Everyone was just brimming with a buzz, and it just made it all so magical in the end.”
Before the show, guests discussed the setup with anticipation.
Leah and Jerry Fulkerson came for their son, Matthew, who played Gad in the show. They came the night before to watch the dress rehearsal and were excited to see the opening.
“I’m going to get a season pass,” Leah said.
Leah called the outdoor setup “absolutely beautiful” and praised the safety precautions.
“I feel safe and secure even though I’m vaccinated,” she said. “I like how everyone’s wearing a mask. You can’t be in a safer area. It’s well spaced, socially distanced.”
Megan Corbett and Megan Daniels came because they missed live theater. Their first CenterStage production, they appreciated the outdoor venue.
“We’re horse girls; we love being outside,” Corbett said. “If COVID’s taught us anything, it’s how to adapt and be flexible.”
Daniels said she was “excited” to check out the CenterStage experience.
“I read about it a little bit,” she said. “A lot of people are like, ‘I can’t believe this is community theater.’”
Sisters Sandy Peace and Serena Knautz came to the show to see their friend, Shea Leparoux, who played the narrator. Neither had seen a CenterStage production before.
Peace said she was impressed with the outdoor, floor level stage setup, and Knautz was thrilled to see a live show again.
“This is our first show since COVID, and it feels obviously safe, Knautz said. “I like that we’re in our little pod, but also just to be able to see the performers doing what they love because they have been off for so long. I think that is really, really good. And of course, you know, my sister even brought her coat of many colors. But it’s too hot [to wear].”
The changes notwithstanding, the elements of the production came together, pleasing Jump.
“The parking was different, the seating was different, the concession stand was different,” she said. “[But] every element, every variable was there, and people just took to it because the excitement was that real.”

Human Resources Lee Chottiner Anita Zusman Eddy was not surprised by an Oct. 8 incident when a Texas school district official, explaining to teachers what a new law governing race-related subjects means to them, mentioned that they may have to …